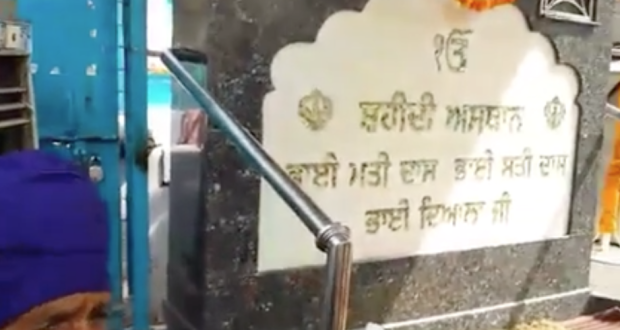 Badal’s and their Delhi acolytes desperate to malign Kejriwal

Old Delhi, India: It appears that a BJP supporting friend of Delhi Sikh Gurdwara Management Committee, General Secretary Manjinder Sirsa was responsible for the court complaint that led to the Shabeel at the Historic Sis Ganj Sahib being demolished by the PWD of the Delhi Municipal Corporation and not the civil administration of the Aam Aadmi Party, as is being widely reported.

Mohan Lal (who’s ‘Raymond’ shop is located three buildings away) is accused of making the complaint several weeks ago, either, because his cars (of which he has several) were denied parking spaces after temple pilgrims had complained upon noticing the longterm arrangement of his vehicles hogging an already cramped capital shrine or because he did so at the behest of his political friends, ie Mssr’s Manjit GK, Sirsa or an unnamed local BJP stalwart.

After the court order to demolish the Shabeel was issued, the officer in charge attended Gurdwara Sis Ganj Sahib four days ahead of the scheduled action to appraise the committee of the plans.

At this point the Sangat present (appox 500 in number) advised Manjinder Sirsa to apply for a stay of execution of the order, thus allowing time to prepare an appeal.

The committee did nothing but disappear and did not arrive at Sis Ganj Sahib until several hours after the demolition team had left and the Sangat had already rebuilt the water dispensary.

Did they want for the Shabeel to be destroyed and used as a political weapon against the AAP?
Regardless of why or how, it’s clear that the desperate Badal regime is framing this issue as an anti Sikh exercise by the AAP Government of India’s capital, even ludicrously claiming it to be on a par with Operation Bluestar.

The thoroughly spent and morally bankrupt Badal regime of Panjab is crumbling by the day and although eagerly anticipated by the states population, is being seen in a sense of nostalgia, as if the regime is already consigned to history, eight months before any election is due.