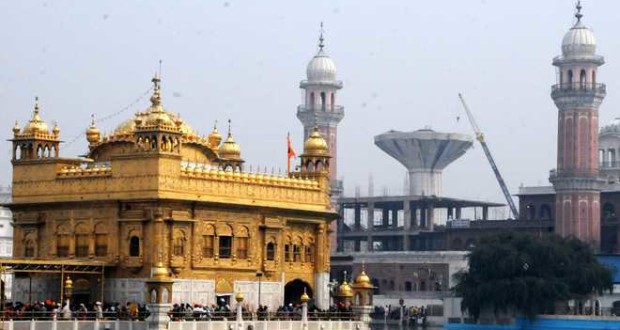 Amritsar, Punjab: To enhance the grandeur of the Darbar Sahib and the Ramgarhia Bungas (towers) in the backdrop, the state government has initiated work to remove an overhead water tank.

Visible from the Golden Temple parikarma, the tank lies between the bungas. The 135-ft-high overhead tank was reconstructed in 1988 to store municipal water after the earlier one was destroyed during Operation Bluestar in June 1984.

In 2011, then Deputy Commissioner KS Pannu had also sought to dismantle it, but work could not be started as there was no follow-up action.

The government has now entrusted the task to the Amritsar Development Authority (ADA). Underground ducts have been constructed to redirect sewage and water supply lines to make the tank defunct.

Since the tank is located near a market, all shops have been ordered to remain close till the dismantling work is on. The shopkeepers have been offered Rs 25,000 per month as compensation.

Sandeep Rishi, chairman, ADA, said special remote-controlled equipment and cutters had been engaged to dismantle concrete slabs that were being removed with the help of a crane.

“The tank had eclipsed the view of the Golden Temple. The tourists generally enquire about the significance of Bungas, but it becomes difficult to tell them about the tank that stands between the Bungas.

“This was brought to the notice of the CM who directed SGPC to do away with the tank. It will take us two months to complete the job. We have adopted a special diamond-cutting technique ,” he said.

2015-02-02
SSNews
Previous: Sikhism lesser known in America; what does the SGPC do?
Next: Congress dares BJP to probe RSS workers’ role in Genocide