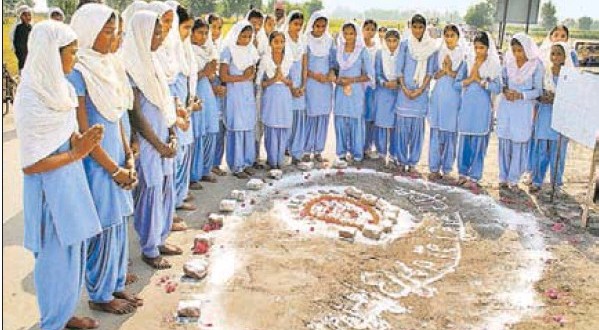 School girls paying obeisance at the site where one of the two firing victims fell to Punjab Police bullets at Behabal Kalan village in Faridkot on Saturday.

Faridkot, Punjab: Several residents from nearby villages, on Saturday, paid obeisance to the two victims of police firing on the spots where they fell to the bullets fired by the police on October 14 on the crowd protesting against the desecration of Guru Granth Sahib in Bargari village.

The residents encircled the two spots where victims Gurjeet Singh from Sarawan village and Krishan Bhagwan Singh from Behbal Khurd village were standing and surrounded them to pay obeisance.

Residents of the nearby villages, who thronged the place in large numbers, were seen paying obeisance at the earmarked places.