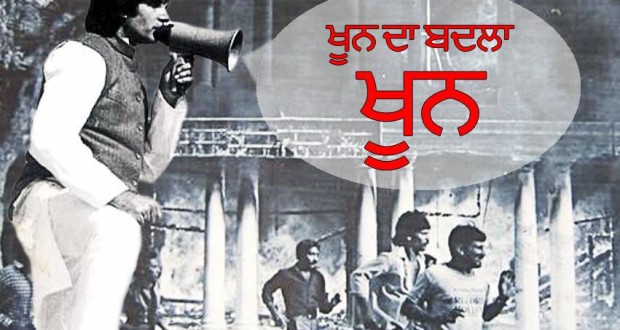 Amitabh who used his star power and incited the Indians to form Death Squads and systematically exterminate innocent Sikhs across India is coming to Australia. - SFJ

Adelaide, Australia: Just before his taking up the role of Cricket commentator during India- Pakistan match on February 15 in Adelaide, the capital city of South Australia, a criminal complaint has been filed against Amitabh Bachchan in Australia seeking action against him for his alleged role in inciting and instigating genocidal violence against the Sikh community in November 1984 in Delhi.

The fresh complaint filed against Bachchan on February 11 with Commonwealth Attorney-General Senator Hon George Brandis QC urges to investigate and prosecute Bachchan under sections 268.117, 15.4 and 16.1 of The Criminal Code Act of 1995 for inciting and instigating Genocide of Sikhs. International Criminal Court Act 2002 has also been invoked in the complaint which is supported by UP resident witnesses Ajmer Singh Randhawa and Delhi resident Babu Singh Dukhia on behalf of widows, victims, and survivors of November 1984 anti Sikh violence. The complaint filed.

“Under these acts, Commonwealth has extra territorial jurisdiction over the crimes against humanity and genocide committed anywhere in the world,” said SFJ legal advisor Gurpatwant Singh Pannun.

The complaint alleges that “On October 31, 1984, after the assassination of Prime Minister Indira Gandhi by her Sikh bodyguards, Amitabh Bachchan, a close friend of Gandhi family, raised the slogans “Blood for blood” calling for violence against Sikhs and the slogan went viral as it was instantly picked by the public and India’s state owned broadcaster Doordarshan and resulted in the massacre of Sikhs.

“Section 268.117 of the Criminal Code Act 1995 provides that Australian courts have jurisdiction in cases involving crimes against humanity whether or not the offense was committed in Australia”, stated Pannun.

The complaint is supported by February 9 sworn statement of UP resident Ajmer Singh Randhawa who claimed that he saw Bacan at Teen Murti Bhawan, alongside Rajiv Gandhi, raising the slogan of Khooon Ka Badla khoon on Doordarshan on November 1, 1984 where assassinated PM’s body was to enable people to pay her last tributes. Randhawa’s statement further claims that “Bachchan was the first celebrity who allegedly made such hatred call on national broadcasting channel demanding the blood of innocent Sikhs which resulted into violence and played a key role in the massacre of innocent Sikhs”.

The complaint has also been forwarded to Commonwealth Director of Public Prosecutions and Australian Federal Police who share the responsibility of investigating and prosecuting crimes against humanity and genocide.

The Supreme Sikh Council, a representative body of Sikhs in Australia with members throughout the Commonwealth is coordinating with human rights group SFJ to pursue the complaint with Attorney General, informed Pannun.