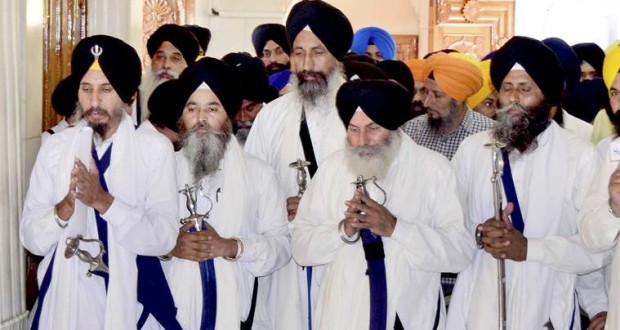 Amritsar, Punjab: Amid speculations and reports about the removal of the five Takht heads, the SGPC has come out with a clarification that no such move was in the pipeline in near future. SGPC will not obey any order of Panj Piyares, willing to face the warth of Sikh Community for not following the maryada set by Tenth Guru, Sri Guru Gobind Singh Ji.

However, the SGPC advised Takht heads to do away with the communication gap with devotees.

SGPC chief Avtar Singh Makkar said the removal of Takht heads was not on cards in near future and that the final decision would be taken by the SGPC executive in its next meeting. “The heads of the five Takhts will continue to occupy their seats and they should also make public appearance more often,” he said.

As the crisis over the flip-flop on the pardon to Dera Sacha Sauda head Gurmeet Ram Rahim Singh erupted, various Sikh organisations, including the ‘Panj Piyares (five beloved ones), had demanded that the Takht heads should step down. They argued that the Jathedars had lost the confidence of the Sikh community by taking the controversial decision in Sirsa dera head case.

A section of Sikh organizations, led by the United Akali Dal and SAD (Amritsar), intend to hold “Sarbat Khalsa” (congregation of Sikh community) on November 10 over the removal of Takht heads and to devise a new methodology which should be strictly followed while appointing or removing Jathedars. Even as the SGPC has discouraged them by not allowing the venue inside the Golden Temple, they were adamant to hold it on the designated date, but at another venue on the Tarn Taran road.