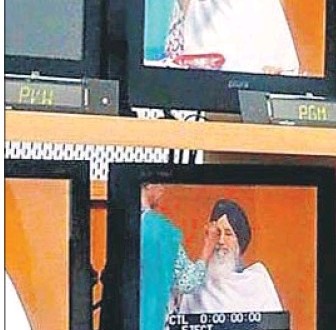 Punjab Police searching for a man who ‘leaked’ Badal’s photo

Comments Off on Punjab Police searching for a man who ‘leaked’ Badal’s photo 2,028 Views

Bathinda, Punjab: With the image of the state government taking a severe beating over the past couple of months due to its sustained failure to handle many sensitive issues on one issue or the other, the district cops seem to have taken it upon themselves to set it right and are on a special mission.

The local cops are looking for the person who ‘leaked’ a photograph of Punjab chief minister Parkash Singh Badal — circulating on the social media — where he is having his make-up done before addressing the state’s residents on October 17 on television. In his address, Badal had appealed for peace in view of the incidents of the desecration of the Guru Granth Sahib.

More than a week after the telecast, Bathinda SSP Rajeshwar Singh Sidhu called a local scribe Swaran Singh Danewalia — who had shared this photograph of Badal on his Facebook profile — to his office on Tuesday and sought to know the source of the photo.

“I refused to share the source,” the scribe told press, also alleging that the SSP threatened to book him if he did not supply him the information.

2015-10-29
SSNews
Previous: Sikhs will not be celebrating Bandi Chhor Divas (Diwali) this year
Next: Attempt to Murder Charge against 19 Sikhs in Punjab