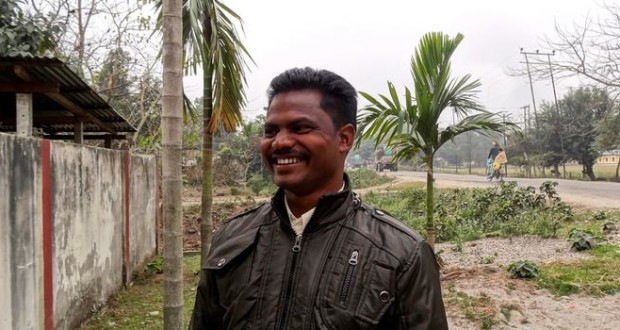 ‘Nobody asks us why we took up arms’: former Assamese militant

Comments Off on ‘Nobody asks us why we took up arms’: former Assamese militant 1,365 Views

Bijay Singh Lakhra has closely witnessed violence for most of his life. He was just 12 in 1996 when bloody clashes erupted between the adivasis and Bodos in Assam, spawning a new chapter of distrust and fear between the communities. Two years later, the state was thrown into another spiral of bloodshed. These events left a lasting imprint on Lakhra. By the time he was 21 he had decided that the only way to protect his community of adivasis and bring justice to it was by violence. In 2005 he formed the militant group Adivasi People’s Army along with four others.

Although a relatively small organisation, the APA carried out a handful of abductions and train bombings over six years before surrendering in 2012 before then Union Home Minister P Chidambaram. The recruits, including Lakhra, laid down arms in the faith that the government would grant adivasis the Scheduled Tribe status and bring development to the community. That hope was never realised.

The feeling that their aspirations were betrayed has got stronger after the December 2014 violence in Assam’s Sonitpur and Kokrajhar districts that killed 81 people. In an interview, Lakhra recounts his journey to militancy and back, and discusses the dashed aspirations of Assam’s adivasis.

How did you take up arms?
In 1996, when the naked bodies of three girls were discovered near an adivasi village, news spread around that those girls were from the Bodo community and that they were raped by adivasi men. That’s when violence erupted. People from both communities were killed, houses were burnt. Later, rumours made the rounds that the girls were not Bodo after all. Since acid was thrown on their faces their identity could not be determined.

I was in the sixth grade then. We stayed in relief camps and our lives were just like the lives of the people living in relief camps now. There was no rice, the dal was rotting. I could not study there. Many people left the villages and went elsewhere, but the people from our Padmapukhuri village, which is near Gossaigaon railway station [in Kokrajhar district], decided to return home.

Violence broke out again in 1998. But by then my parents had sent me to Kokrajhar town to escape the violence and to concentrate on my studies. I somehow finished matriculation and higher secondary. I completed first year in degree college, but by then I was determined to take up arms to bring justice to our people. I did not fill up the admission form for the second year and left home. I realised that if we continued to live like this, we were allowing a repeat of the British policy whereby we were tortured.

How was APA born?
Around that time, there were several people thinking alike but they made their own groups. The Adivasi Cobra Militants of Assam and the Birsa Commando Force were formed after 1998 to defend the adivasi community. But they laid down arms in 2002-2003. After that, the groups that remained were the All Adivasi National Liberation Army and the Santhali Tiger Force. Most of these organisations were operating from central and upper [north] Assam and together with them we felt that someone was needed in lower [south-west] Assam. That’s how I decided to form the Adivasi People’s Army. It was born on February 11, 2005, with just five people.

What were the next steps after the APA’s formation?
The 709th battalion of the ULFA [United Liberation Front of Asom] trained us for three months in Bhutan. They taught us to use arms, how to make bombs and the strategies to form an organisation. Some adivasi boys who had joined ULFA joined us. Our first job was to recruit boys from villages by conveying to them the truth: that we adivasis had been oppressed for long, that we had no idea of what the future had in store for us… By 2010, our cadre increased, and we were 127 in all. People trusted us and boys began to come to us on their own.

How did you get funding?
We had no money in the beginning. We worked under ULFA and they provided us with arms, so we did not have to buy any. Then we began to kidnap people. The first man we kidnapped was an officer from the agricultural department. While we held him captive, we explained to him why we did so. He was a good man, he was an Assamese man. He was also rich and, after the ransom was paid and he was released, he gave us Rs 1 crore to support us.

What were your other activities?
We did three kidnappings in all. We also made our own bombs. We decided that if the government betrayed us, as it has for so long, we would martyr ourselves by becoming suicide bombers. In our constitution, we had written that we would not kill anyone. But if need to kill would arise – and we had plans to kill some senior officers and politicians – we would become martyrs too with suicide bombings.

But wasn’t APA involved in the killing of Bosco Chermaco, the president of All Adivasi Students’ Association of Assam in February 2011?
I was in Jharkhand at that time, trying to find some work, and our C-in-C [Commander-in-Chief] was out too. We later learnt that in Soraibil village, an adivasi girl had been raped by a church priest. Somehow, the priest disappeared and the girl turned hostile, so the case was never pursued. We heard that Chermaco had been bribed to hush up the matter and that caused upheaval in the community. There are many conflicting stories about what happened, so all this is from hearsay…

Sevanand Murmu, one of our commanders managing APA at that time, perhaps killed Chermaco. Within a few days, Sevanand was found dead. We heard that some boys of the Adivasi Cobra Militants of Assam killed him. Two of our boys were subsequently arrested and the CBI interrogated me. But I could show them that I was away in Jharkhand and knew nothing about all of this.

APA has been accused of bombing trains…
We had planted a bomb on the Kanchenjunga Express in Guwahati in June 2011. We also clamped the rail route from Udalguri to Tezpur. We halted the trains going to south India and Bihar since most of the ministers are from these places.

We also caused an IED explosion on the railway track near Bhatkuchi between Rangia and Ghagrapar, which injured several people and killed one. We had informed the government earlier through ads in local papers that they should start talks immediately on our demand to give us Scheduled Tribe status. But there was no response. Thrice, we advertised information that we would make our presence felt if no action was taken. We also noted that we would cause a blast on a train. When there was no response again, we carried out the explosion.

You also prevented commercial vehicles from plying into Assam.
All vehicles of all companies would have to pay us and other groups to enter Assam. Else, we would set them on fire. We would negotiate this with the company directly.

People say companies do not come to Assam because of extortion…
There is a refinery in Bongaigaon, but the factory is in West Bengal. The tea grown in Assam is sent elsewhere for processing. All the raw materials are from here, but there is no revenue coming into Assam. They do not provide employment to the youth here.

Like ULFA, did you also have a network outside India?
When APA’s cadre strength reached 25, each of us had individual responsibilities. We were all forming connections across the country. We also set up a network in Nepal and China. We knew there could come a day when some of us would have to turn suicide bombers, and the government would chase the rest of us. We needed a safe place and China was that refuge.

How did the process of ceasefire take place?
After the Adivasi Cobra Militants of Assam and Birsa Commando Force surrendered, they acted as government spies, tracking us and the Santhali Tiger Force and the All Adivasi National Liberation Army. Later, STF too surrendered. These three groups were then after us. At the same time, ACMA boys killed Sevanand. We realised this was getting messy, adivasi boys were fighting each other.

In July , after the railway blasts, most of us were in China. ULFA was fragmenting and some of them were talking about surrendering. ULFA chairman Arabinda Rajkhowa had also declared ceasefire. Our C-in-C had begun discreet talks with the government and he announced a ceasefire in 2011. We were livid but realised that we could not fight amongst ourselves.

We sent a message to all the groups, saying that all of us should lay down arms and work together to form a coordination committee to push for democratic talks to get Scheduled Tribe status.

What happened after the ceasefire?
The government assured us it would begin the process of granting us ST status. We had two meetings – in July 2012 and July 2013 – in Delhi, but there has been no progress. No government is concerned about the adivasis.

What about those who surrendered?
The boys were assured that the cases against them would be withdrawn, but nothing happened. I still have to visit courts in two cases. The boys were to receive a monthly stipend of Rs 3,500, but they receive only Rs 3,000. A separate camp was designated for them and they were to get ration. But the ration is meagre. When the talks with the government went nowhere, 21 boys fled from the camp in May 2013.

Could it be possible that some of them attacked Bodo villages in revenge on December 24?
We don’t know where they are. We had even informed the government about them leaving the camp. Everything is possible, especially since five of them were trained in using sniper rifles and UG guns, and three of them were trainers themselves.

When you were part of a militant group, what were the successes in the adivasi community’s development?
There was no success then, and none now. But at least at that time, nobody would attack our community on an impulse. They would think twice.

What kind of society do you envisage for the adivasi community?
Cultural, societal, and political changes are necessary for the development of our community. We want schools and good education, so that children can have a better life. We want to develop organic agriculture and sell our produce outside. If the government grants us ST status, we could get the funds to do this.

Do you still feel taking up arms is the only way to development?
Nobody asks us why we were forced to take up arms. Arms are not the only alternative but when all…our pleas go unheard, what option do we have? What is the use of education when even educated people do not get jobs and jobs have to be bought with large sums of money?