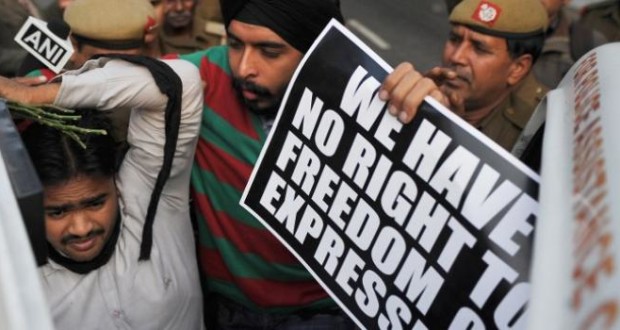 Comments Off on Netizens tweet #No66A as government insists that the internet needs to be censored 1,069 Views

Delhi, India: When the previous Congress-led government started using section 66A of the Information Technology Act to suppress dissent, it received plenty of flak from the opposition. The Bharatiya Janata Party’s supporters compared the government’s actions to strategies implemented during the Emergency and the leader of the opposition Arun Jaitley told Parliament that this amounted to excessive censorship.

But over the last few months, it has become clear that Jaitley’s government is going to defend the same provision in the Supreme Court. Reports on Thursday made it clear that the government sees section 66A as a vital regulation, adding that the internet needs more stricter curbs than print or television.

“Considering the reach and impact of medium, leeway be given to legislature to frame rules. On Internet every individual is a director, producer and broadcaster and a person can send offensive material to millions of people in nano second just with a click of button,” said additional solicitor general Tushar Mehta to the Supreme Court.

This has prompted a response from those on the internet who believe section 66A is problematic by its very nature, and deserves to be struck down. Calls for people to tweet #No66A began ringing across the internet.
Although the government has admitted that section 66A is prone to “abuse and misuse”, it insists the law itself is well-intentioned. This provision in the IT Act that allows users to be imprisoned for using the internet to send any information that is “grossly offensive” or could “cause annoyance or inconvenience” to the person who has received it. The intent of the law initially was to stop the spread of spam messages in the country, which is why it included the references to annoyance and inconvenience.

Instead, the section has been used to arrest a cartoonist who made fun of Parliament, Air India employees who made Facebook and Orkut comments against rival trade union leaders, a businessman who put out an allegedly defamatory tweet about the son of Congress leader P Chidambaram and two young women who commented on Facebook questioning the shutdown of Mumbai following the death of Shiv Sena chief Bal Thackeray.

All of these incidents prompted Jaitley at the time to question the language of section 66A, which he said was written in a way where the expectation was that the provision would be misused. Saying that the 1975 Emergency would have been a fiasco if internet had been around, Jaitley questioned whether simply “offense” or “annoyance” or even “defamation” should be a reason to take information off the internet. The BJP’s supporters likened the provision to the Emergency and even had the hastag #Emergency2012 trending at the time.

A clutch of organisations and individuals have since taken this matter to court, insisting that Section 66A along with a number of other provisions in the IT Act are unconstitutional. In December, the Supreme Court asked the new government to clarify its stand on the matter, warning that it could easily stay the provision unless the state’s stance was made clear.

“Heavens are not going to fall if the provisions are stayed… because this country has been in existence for the past 60 years without these provisions,” the Supreme Court said. “Either you file the affidavit within a week or we will stay the operation of the provisions until we dispose of the matter.”