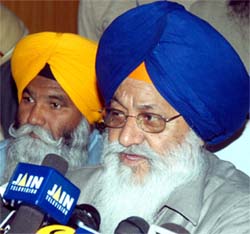 Makkar again does a Flip-Flip on Jathedars’ Removal

SGPC chief on Friday declared that there was no move to remove the jathedars. Within couple of hours, the SGPC — considered as mini Parliament of Sikhs —hurriedly withdrew the statement.

Makkar also advised the Sikh high priests to make their way into the public domain and interact with people. Currently, the jathedars, who have come under blistering attack from the community over the pardon row, have been avoiding public functions, including the ones that are held in the Golden Temple complex.

Earlier, the SGPC chief rubbished the media reports on removal of jathedars of three Takhts — the Akal Takht, Takht Keshgarh Sahib and Takht Damdama Sahib — which fall under the gurdwara panel’s jurisdiction. “There is no move to remove the Takht jathedars. Such reports in the media are mere rumours,” he said. After Makkar’s remarks, SGPC officials rang up mediapersons and said the statement had been withdrawn. No official statement, however, was issued in this regard.

Makkar’s advice to jathedars to venture out and meet people seems strange, especially in the wake of anger among people against them. Recently, many SGPC men and SAD leaders have been heckled by people at public events. Giani Gurbachan Singh has remained confined to his home-cum-office in the Golden Temple complex ever since he was confronted by some SGPC employees, who called him “paapi” (sinner).

Sources said the decision on removal of jathedars could be taken at the SAD core committee meeting at Chandigarh on November 2. Accordingly, the decision will be conveyed to the SGPC executive, which has the authority to seek the resignations of the three jathedars. In case of defiance, the jathedars are likely to be sacked.

The SGPC will organise an “akhand path” to pay homage to victims of the 1984 anti-Sikh riots. The “paath” will commence in the Golden Temple complex on October 31 and the ‘bhog’ will be held on November 1. All eyes will be on the Akal Takht jathedar to see whether he heeds to the advice of Makkar and attends ‘akhand paath’ and ‘bhog’ ceremonies.