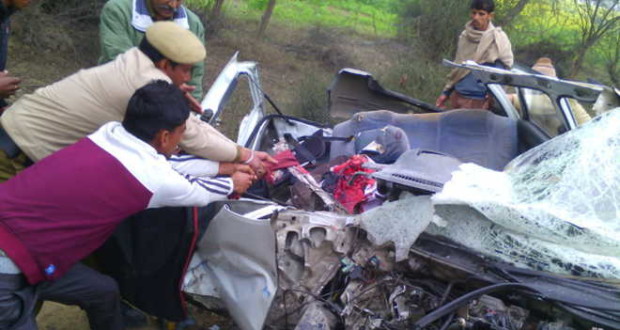 Comments Off on Ludhiana and Amritsar are India’s top road accidents 1,470 Views

Delhi, Punjab: India’s killer roads claimed the lives of 75,000 people aged between 15 and 34 years last year. Over 82% of these victims were males, according to the Road Accident Report for 2014 prepared by the road transport and highways ministry.

According to the report prepared by the ministry’s transport research wing (TRW), the chances of getting killed in a road crash are higher in cities such as Ludhiana, Dhanbad, Amritsar, Varanasi, Kanpur and Patna.

It said about 12% of the fatalities happened in 50 cities with populations of over a million each, Delhi leading with 1,671 deaths and Chennai registering the second highest number at 1,118.

Last year, 318 persons died in 475 crashes in Ludhiana while 106 such cases claimed 63 lives in Dhanbad. The holy city of Amritsar registered 94 fatalities in 165 crashes.

“There is chaos on roads and lawlessness everywhere. Enforcement agencies are not doing their job properly and drivers are indulging in overspeeding and drunken driving without any fear of being caught. The authorities are also not serious in correcting the black spots identified in way back in 2005.” He pointed out that the bad state of roads pushed up the fatality rate further.

The latest estimate by the World Health Organization also shows that globally, world road traffic injuries are the number one cause of death among young people aged 15-29 years. Annually, about 3.4 lakh youngsters in this age group die in accidents. “This shows that there is a need to pay attention to making young people more aware of road safety issues. Families should play a big role in sensitizing them on how to behave safe on roads. It’s a mammoth loss and calculating the social cost would reveal how big it is,” said road safety expert Rohit Baluja.

PM Narendra Modi too made an appeal on the issue to elders of families in a recent radio addresses, Mann ki Baat.

The report says that the total number of road crashes has increased marginally from 4.86 lakh in 2013 to 4.89 lakh in 2014. The number of fatalities has also gone up by about 1.5%. Thirteen states Uttar Pradesh, Tamil Nadu, Maharashtra, Karnataka, Rajasthan, Madhya Pradesh, Gujarat, Andhra Pradesh, Telangana, West Bengal, Bihar, Punjab and Haryana account for about 83.2% of the deaths.

The report also reveals how road crashes in the southern states of Karnataka and Kerala recorded the maximum number of grievously injured victims followed by Maharashtra and Uttar Pradesh. “Many such victims may have become disabled completely for the rest of their lives. This is a huge burden on families and studies by the Asian Development Bank have shown how road injuries and fatalities push affected families to poverty,” said K K Kapila, chief of the Geneva-based International Road Federation.

“We have been visiting the states reporting maximum deaths and they have become more sensitive towards making roads safe. States are establishing lead agencies for road safety issues as a whole,” said a TRW official.

Meanwhile, ministry sources said there is a greater need to set up a national authority that can be held accountable for road deaths, on the lines of institutions in developed countries like the US and UK.