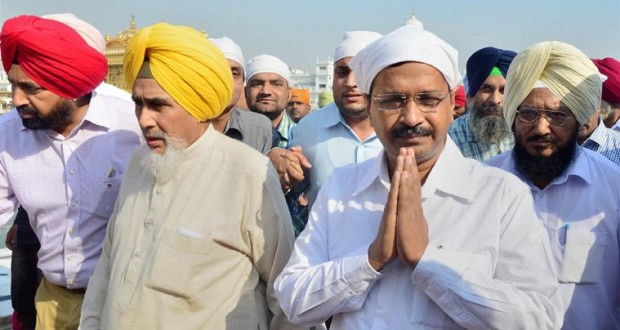 Amritsar, Punjab: No one can live in peace after disgracing holy scriptures, said Delhi Chief Minister Arvind Kejriwal, who paid obeisance at the Golden temple in Amritsar and prayed for peace and communal harmony in Punjab.

“I also appeal to the people of Punjab to maintain peace,”he said.

Kejriwal was in Punjab to visit the families of the two youths who were killed in police firing while protesting against the sacrilege of Guru Granth Sahib in Faridkot.

During the brief interaction with media, Kejriwal said that he was deeply hurt due to incidents of sacrilege to Sri Guru Granth Sahib and following tension in Punjab and had prayed for the peace at the most sacred place where all wishes are fulfilled by the almighty.

He flayed the incident of opening fire on peaceful protesters by police in Faridkot.“It was unfortunate that two people lost their lives,” he said. He said the state government should not only immediately arrest the anti-social elements who had disrespected Shri Guru Granth Sahib but also give exemplary punishments to them.

“Committing sacrilege to the religious book didn’t benefit anyone,” he said, while adding that no one can live in peace after disrespecting holy scriptures and the people who did this heinous act should also think on it.” When asked about whether he had any apprehensions on the persons arrested for sacrilege of Guru Granth Sahib by the Punjab police, Kejriwal said it was up to the state government and police to investigate and arrest the culprits.

He, however, refused to comment on any political question in the premises of the Golden Temple.He was accompanied by other AAP leaders including Sangrur MP Bhagwant Mann, Punjab State Convener Sucha Singh Chhotepur, Senior advocate HS Phoolka, who had resigned from party posts to devote his time to Sikh Genocide cases, and Sanjay Singh.

2015-10-24
SSNews
Previous: Blockade of Harike Bridge to be lifted only after reinstatement of Panj Piyares
Next: Top 5 Punjab Unrest Videos