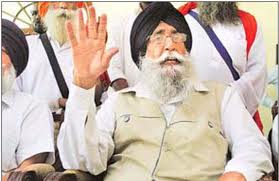 Jathedars Have Lost All Rights

Comments Off on Jathedars Have Lost All Rights 401 Views

Amritsar, Punjab: Simranjit Singh Mann, while talking to the media, said preparations to organise Sarbat Khalsa in Amritsar on November 10 were in full swing.

On being told that Sarbat Khalsa could be called only by the Akal Takht jathedar in consultation with the other Sikh Takht Jathedars, Mann said that after taking the wrong decision to pardon Dera Sacha Sauda chief Gurmeet Ram Rahim Singh in the 2007 blasphemy case, they had lost all the rights.

“We are receiving very positive online response from devotees in the US and Canada about the Sarbat Khalsa,” he added.

Mann also went to meet senior superintendent of police (SSP) Rajinder Singh to demand an investigation against the cops who had allegedly beaten up the Sikh protesters during the police remand, but the SSP was not available in his office.