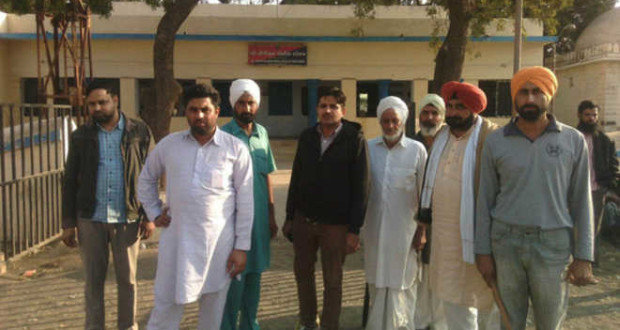 The Punjabi farmers who were attacked stand outside a police station in Bhuj, Gujarat.

Kutch, India: Sikh families settled in the Kutch region of Gujarat are living in fear following the yesterday’s attack on some farmers at Loria village, 15 km from Bhuj.

“We feel insecure as there is no one here to protect us,” said Surinder Singh Bhullar, a farmer settled near Bhuj. “We will hold a meeting on Tuesday to decide on steps to deal with the land mafia trying to oust the Sikh farmers from Gujarat,” he alleged, adding that neither the Punjab nor the Modi government had ensured their security.

In the yesterday’s attack, the land mafia allegedly supported by certain ruling party leaders not only damaged the vehicles of Sikh farmers but also tried to harm them. A farmer, Jagjit Singh, was hit with a sharp-edged weapon. The incident took place at the time of the demarcation of the land at Loria village by a government agency. “Earlier a month ago some people in the village had stopped the agency officials from demarcating land belonging to the Sikh farmers. The district revenue authorities and the police had again sent the agency officials to accomplish demarcation, which is being carried out in the entire state,” said Amandeep Singh, a Punjabi farmer from Loria.

“We had sought security from the SSP and the district collector in advance, but our request went unheard. We were told to go ahead with the demarcation and that the police would be sent if there is any trouble,” he claimed.

The police have registered a case against both parties, including Sikh farmers, reportedly under political pressure. “My father Sukhdev Singh, who is admitted to a hospital in Kotkapura for the past two days, too, has been booked,” he said. “Despite the fact that we were attacked and our vehicles were damaged, the police have registered a case against us,” he alleged, adding that the police had booked the attackers after much persuasion.

At least 22 Sikh families were allotted 440 acres of land at Loria village. About 300 acres had already been acquired by the government. Another 20 acres of land belonging to a Sikh farmer was “fraudulently” registered in the name of a local resident. It was only after a long legal battle the police had registered a case against those involved in the fraud.