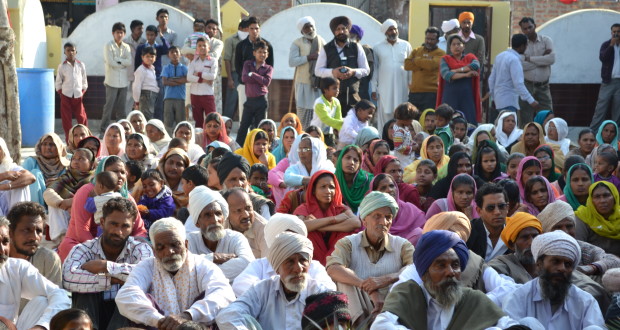 Amritsar, Punjab: Majha region of North Punjab (India) is a traditional Sikh-Akali belt. It has the history of protecting Sikhism and Harimandir Sahib from the onslaughts of the invading traders. Sikhs under Baba Gurbakash Singh, Baba Deep Singh and Baba Naudh Singh are known to have laid down their lives along with their fellow Sikhs showing heroic deeds against the invaders on Sri Harmandir Sahib. Every driver bows and stops at the Samadhi of Baba Naudh Singh on Amritsar-Tarantarn road.

Bowing my head too, I pointed to S. Balwant Singh (name changed):
Me: ‘This is the most revered place in my heart only next to Sri Harmandir Sahib since the Sikhs laid down their lives fighting to protect Sri Harmandir Sahib”.
Balwant: “Should have been certainly so”; his half-hearted answer perplexed me.
Me: I remarked, “You appear to be thinking otherwise!”
Balwant: “No, No not so as you think, but it is not the same now” His reply was equally surprising.

Balwant: “The places of sacrifices of the martyred Sikhs have now been converted into money-spinners by Babas…. Seven Dera like gurdwaras have come up within these six-seven kilometres within a span of three-four years.”
He said what he has been watching daily since all these Deras are very close to his Home.
Me: “How come this sudden build up?” I was feeling quite hurt.
Balwant: “Seeing one another benefitting, they sprang up. The most earnings are in Tahla Sahib. The most respected is the Dera Gillwali where even the most influential family of Punjab makes monthly visits, and people approach for getting their problems from administration solved.”

His reply led me to further enquiry:
Me: “Where is that Dera?”
He explained:
Balwant: “while coming from Sri Amritsar, you saw the widened double highway ending. The highway has been widened up to the place only where the VIPs have to come each month and not beyond.”

Me: I was quite intrigued by this. “Is the political influence being used for such like things?”.

Balwant: “Political influence ensures dominance of the ruling over the ruled.”
Me:“But that is no Raj-Dharma. Where is the democracy?”
He just laughed at my reply.
Balwant: “Do you know how dominance is maintained?” questioned the advocate sitting close by.
Me: “How”
Balwant: “Using religion, using police, using drugs to decimate.”
Me: “I do not think it could be so.”
Balwant: “It is so. I am fighting cases against the police officials who have been carrying orders of their bosses to file false cases against certain individuals. Even a CBI inquiry is ordered against one SHO.” The advocate said. ‘Even the senior officers posted in this area are of Punjab cadre. Central cadre officers are not being posted as they tried to arrest the trend of fast flow of drugs in the area. They had to be posted at the behest of the local political leaders who maintain this free flow. Most of the youth are now in the grip of drugs.”

Balwant: “In this area drugs and local brand of liquor is a lucrative business. It is all flourishing under the patronage of local political leaders. You would have seen a story on Aaj Tak recently where large scale liquor distillation was going under the nose and knowledge of the local MLA. The SHO was helpless since he was refrained from taking any action against these criminals. As was said earlier, those who oppose these leaders are found behind the bars even on false cases. Even it is in the knowledge of the High Court that these false cases are being filed often. Most dastardly cases are of peddling drugs which are generally leveled against the most serious opponent and specially the political opponents. People are put behind bars and no one is allowed to help them. This is the same area where maximum eliminations in fake encounters took place during the militancy days. People have started taking injustice as their fate.”

It was quite shocking. To clarify further, I questioned:
Me:“What is the effect of the Deras?”
Balwant:  “Deras lure the ignorant and fill the coffer. Instead of teaching Sikhism, they propagate personality cult, showing Dera heads as supreme. They also propagate Hindu ritualism like breaking coco-nuts and tying red thread (molly). Frankly, they have damaged the Sikhism beyond redemption.”
Me: ‘Beyond redemption! What do you mean?’”
Balwant: Pointing to his servant he said: “This boy has become Chrisitian recently. Do you know why when his father is Nihang?”
Me: “Christian? How is it?” I enquired. I wanted to know from the person direct.

I called the boy, named Nima (name changed) and questioned,
Me: “Are you a convert to Christianity?”
Nima: “Yes!” He reluctantly said. However he came out slowly since he had been listening to us intently and knew the base of the discussion.”
“Not me alone. Most of the poor and the unemployed youth are becoming Christians. Most of the youth got their hair cut already and have become apostate. Public in general have curtailed going to Gurdwaras and even deras now as they know their truth. They find new Churches as the better places to go. All aound these deras we have new churches: Varpal, Nikka Chabba, Balachak; all these villages are having new churches within these 6-7 kilometres. A large Number of Churches sprung up recently in the entire border belt of Tarantaran and Gurdaspur areas and people are converting to Christianity en masse.”
Me: “You said your father is a Nihang, a devout Sikh. Why did you convert to Christianity?”
Nima: “Why? We are not inhuman as they treat us. They give us no favour. They give no jobs to us but still want us to obey them like slaves. Why should we. They want the youth be drugged and destroyed. They have no human life considerations. The pastors treat us very humanly and sympathetically. They treat us equal and as important as anyone else. They help us in need. You will soon seen most of the downtrodden converting en masse if these leaders and dera people go on treating us like this.”

I was shocked at the anger the boy had against the higher castes, deras and the ruling combine.

More shocking was the trend of conversions. I could not sleep well in the night and was woken up by the blaring of the speakers at about 3 AM from 3-4 deras cum gurdwaras. Amidst them I could listen to the sound “Ameen” from pastor of the church nearby and thought of Giani Gurdit Singh, Gurmukh Singh and Jawahar Singh of the Singh Sabha Movement at the conversion of four Sikh Youth. The number now has become so large now without any of Gurdit Singh’s standing up now! As I was being shown those seven Dera type gurdwaras, finding heaps of Coconuts around, I felt that it certainly needs a “Sikh Sudhar movement” or “Sikhi Bachao Lehar’ to save the new generation from going astray.