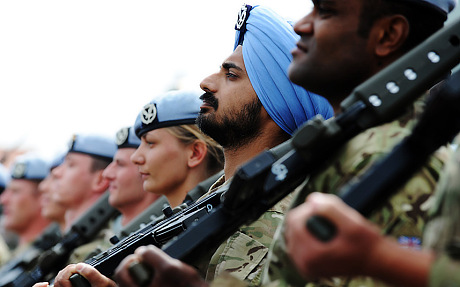 Comments Off on British Army examines plans to create a Sikh regiment 2,469 Views

London, UK: The head of the British Army is looking at proposals to recreate a Sikh regiment, a minister has said.

The Chief of the General Staff is examining the feasibility of a Sikh unit, including the possibility of a reserve company, and it “may well have merit”, Mark Francois told the Commons.

A new unit would inherit many of the “proud traditions of Sikh regiments” from the Army’s past, he said.
Thousands of Sikh soldiers served in the British Army in the 19th century and in the First and Second World Wars, and 10 Victoria Crosses have been won by soldiers serving in Sikh regiments.

Reviving a Sikh unit has been suggested several times in the past. One recent attempt was abandoned in 2007 by the Ministry of Defence amid fears that the move would be branded racist.

Speaking during defence questions in the Commons, Conservative former defence minister Sir Nicholas Soames urged ministers to “do away with political correctness” and raise a Sikh regiment. 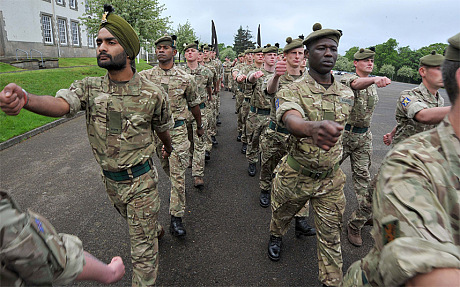 He told Mr Francois: “You will be aware of the extraordinary gallant and distinguished service by Sikhs to this country down the generations.

“Would you not agree with me that it’s high time to do away with the political correctness which infects some of this thinking and actually raise a Sikh regiment to serve in the country and make up a very serious gap in our Armed Forces?”

Mr Francois, minister for the Armed Forces, replied: “With regard to your specific suggestion, can I say that you are one of a number of Members of Parliament who have raised this suggestion with me recently.
“We have passed this possibility on to the chief of the general staff (CGS), who is now looking at this issue and we are awaiting CGS’s comments back.

“But the idea may well have merit.”

Conservative Rory Stewart, chairman of the Defence Select Committee, suggested a Sikh company within the reserves could be explored “as a starting point”.

He added: “There seems to be much more possibility within the reserves to begin what seems like an excellent idea.”

Mr Francois replied: “I said earlier the idea may have merit but we’ve looked at one specific option, or are looking, at the possibility of a reserve company – not least one which would inherit many of the proud traditions of Sikh regiments going back through many years in the British Army.

“[Defence Minister Julian Brazier} is leading on that particular aspect and he too remains in contact with CGS on this matter.”

In 2007, the MoD scrapped a similar plan after the Commission for Racial Equality advised it could be seen as divisive and amounted to “segregation”.

The latest manning figures show the Armed Forces have around 160 Sikhs in their ranks, including 130 in the Army. Last year an official British Armed Forces Sikh Association was formed.

Lord Singh, director of the Network of Sikh Organisations, said a Sikh unit was something “that would be nice if it happened”.

He warned it had been suggested many times and had always proved difficult.

He said: “There aren’t that many Sikhs in the Army. A regiment needs a bit more. There needs to be some enticement to go, but with all the defence cuts, the Army may not look that tempting.”

The recent disclosure that the British military had advised Indira Gandhi over her 1984 attack on Sikh separatists barricaded in Amritsar’s Golden Temple, may have led to some bad feeling among Sikhs in Britain, though he suggested this would pass with time.

He said: “There are some major difficulties. It’s something that would be nice if it happened.”

2015-02-23
SSNews
Previous: ‘Nobody asks us why we took up arms’: former Assamese militant
Next: Netizens tweet #No66A as government insists that the internet needs to be censored