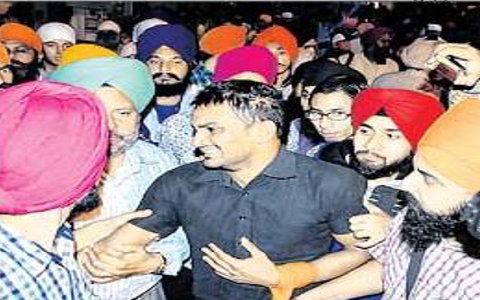 Amritsar, Punjab: A group of 50 Nihangs brandishing swords was brought to the Harimandir Sahib by the infamous Gulzar Singh Ranike SAD(B) and his son, who have been investigated for embezzlement of grants and liquor distribution at SAD(B) rallies respectively.

Dyal Singh Kolianwali SAD(B) the biggest defaulter in Punjab brought about 300 assorted youngsters, some were shorn and looked like hired akhara pehalwans. About 5 of these youngsters were caught by Sikh activists smoking in the area between the Akal Takht Secretariat and the residence of the Akal Takht Jathedar.

SGPC chief Avtar Singh Makkar said that a three-member committee led by executive committee member Rajinder Singh Mehta had been formed to look into the “unpleasant” happenings at the Golden Temple on Bandi Chhor Divas as well as monitoring the role of a section of identified SGPC employees who participated in the congregation.

In the backdrop of this move, reports had surfaced that several persons brandishing swords in the Golden Temple complex on the day of Bandi Chhor Divas were allegedly hired by the SGPC and the SAD (Badal).
An SGPC executive member Karnail Singh Panjouli had questioned the executive committee to come out clean over the issue.

At 3.45 pm on November 11, when Akal Takht Jathedar Giani Gurbachan Singh was delivering the customary address to the ‘sangat’, several radical organisations, including Dal Khalsa and SAD (Panch Pardhan), raised slogans and showed black flags to lodge their protest in a peaceful manner.

Soon, a group of people — some attired in Nihang dress code and others clean-shaven – came there brandishing swords. Later in the evening, pilgrims caught hold of a group of youths, who were in an inebriated condition, loitering in the Golden Temple complex.

SGPC is in Chaos

Those SGPC employees who were part of the ‘Sarbat Khalsa’ held at Chabba village on November 10 are under the scanner. Some SGPC employees were also honoured on the dais during the congregation and this made SGPC chief pissed.

SGPC chief Avtar Singh Makkar said that a three-member committee led by executive committee member Rajinder Singh Mehta had been formed to look into the “unpleasant” happenings and as well as monitoring the role of a section of identified SGPC employees who participated in the congregation.

2015-11-20
SSNews
Previous: Are Sikhs radicals? Yes we are…
Next: Badal’s and their Delhi acolytes desperate to malign Kejriwal