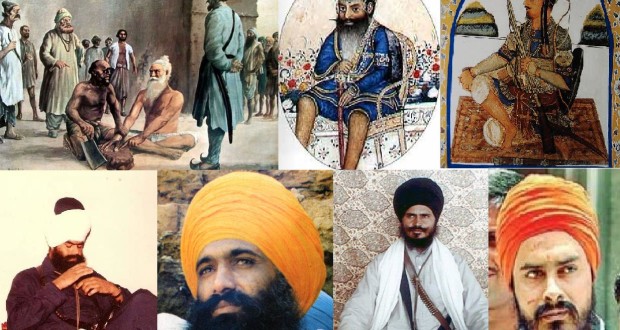 Are Sikhs radicals? Yes we are…

Radicals? We’ve been radicals since Guru Nanak Sahib ji refused to put on that Janeu. We were born radicals. When you believe the Divine lives in everyone and that equality is a human right, you are by definition a radical.

Since it was created by Guru Harigobind Sahib the Akal Takhat has stood as a very literal sign of the sovereignty and freedom of the Sikh nation. Today on the day we celebrate the creator of that Takhat, Guru Harigobind Sahib and his act of breaking bonds of slavery, let us remember those Sikhs who were granted the seva of taking care of the Eternal Throne and who sacrificed everything to maintain it’s dignity.

Bhai Mani Singh was shahid for the right to celebrate this very day, Divali. He freed Akal Takhat (and the entire city of Amritsar) from the control of the Minai (descendents of Prithi Chand) under the orders of Guru Gobind Singh Sahib in 1702. He brought about unity in the Sikh nation and dedicated his life to the education of Sikhs and the spread of Sikhi. His example of fearless service in the face of government oppression would be followed by the other Gursikhs in this photo.

Akali Phula Singh was Shahid fighting for the Khalsa Army. His example of maintaining the dignity and independence of the Akal Takhat even under Khalsa Raj is an inspiration. Akali Hanuman Singh led the Akalis against the British in the 2nd Anglo-Sikh Wars and died fighting on the battlefield in the first war of anti-colonialism in South Asia.

Mirroring today’s situation, Jathedar Ranjit Singh was another ‘terrorist’ who was appointed Jathedar while in jail. His act of bringing justice to those responsible for the deaths of Gursikhs in 1978 makes him a hero, regardless of what we may think of his actions in the last fifteen years. He spent 13 years in jail for this Panth, giving up his youth and dreams to bring justice to the Sikh nation.

In 1993 both Jathedar Gurdev Singh Kaunke and Jathedar Gubachan Singh Manochahal were Shahid (not together). One was a quiet spoken Giani and the other was a warrior. But both did everything they could to maintain the sovereignty of the Akal Takhat.

Jathedar Jagtar Singh Hawara is a radical. He’s a radical like Kaunke, like Akali Phula Singh. He’s a radical like Bhai Mani Singh. He’s a radical who tries to follow in the footsteps of the greatest radicals of all, our Guru Sahibs. He’s not perfect, he’s not everyone’s choice. A lot of us are apprehensive about him. But a half million Sikhs defied government persecution and in a single powerful voice shouted a jaikara for his appointment. In an election, if your party loses you don’t tear up your passport. Same thing here. You’re a part of a Panth, and this is how we make decisions. It is our responsibility to stand behind the Sarbat Khalsa and follow the Gurmatta as if it was from the mouth of Guru Gobind Singh Sahib himself.