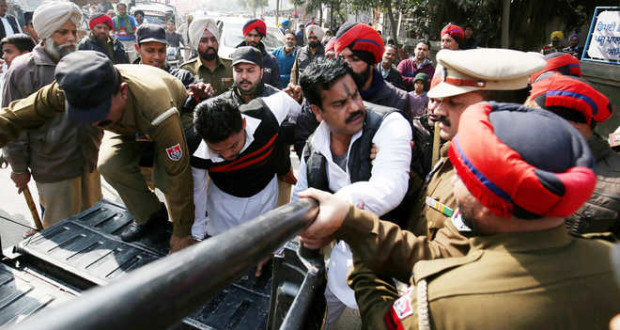 Comments Off on Amritsar cops arrested all Sikhs while giving 8 Shiv Sena fanatics a chance to run away 2,139 Views

Jarnail Singh Bhindranwale was the leader of the Damdami Taksal (a Sikh religious group) and political revolutionary and is notable for his support of the Anandpur Sahib Resolution. He called for a return to what is considered to be the “pure” roots of Sikhism. He advocated against the consumption of liquor, drugs and laxness in religious practices, such as the cutting of Kesh by Sikh youth. He strongly condemned the Indian constitution’s Article 25 declaring minorities such as Sikhs, Jains and Buddhists as part of Hinduism.

According to police, Taksal activists had opposed Shiv Sainiks who were trying to burn the effigy of Jarnail Singh Bhinderanwale in the prominent entry gate of Hall Bazaar. Shiv Sena hardliners also gathered with the motive to disrupt the flow of Sikh Pilgrims and tourists to the world well known Sikh holy Gurdwara (temple) “Sri Harmander Sahib”. Hall gate is the entry passage created by Sikh ruler, Maharaja Ranjit Singh. Shiv Sena deliberately pick this spot to stir the reaction from Sikh groups. As tension mounted, police stepped in and resorted to mild lathi-charge to disperse the crowd.

Upon public pressure, Assistant deputy commissioner Parampal Singh finally made the public statement that his police are looking to nab rest of the Shiv Sainiks.