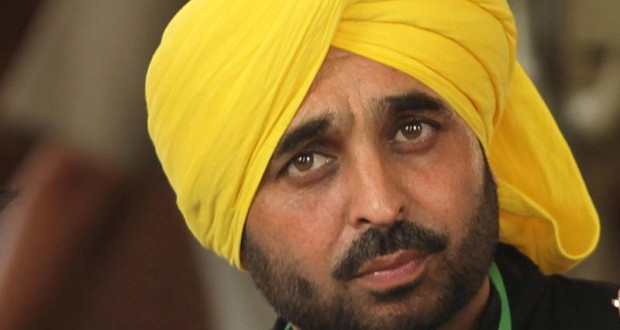 Comments Off on AAP Bhagwant Mann Shows up at Sikh Bhog Ceremony under Influence of Liquor 1,448 Views

Bhagwant Mann was present there in the gathering along with Faridkot MP Prof Sadhu Singh and party’s Punjab Convener Sucha Singh Chhotepur.

Some Sikh youths present there allegedly chased Bhagwant Mann out of the venue alleging that he had come to attend the bhog while he was drunk. They alleged that Mann, who was under the influence of liquor dared to sit on the stage where there was Prakash of Guru Granth Sahib.

AISSF president Karnail Singh Peermohammad, confirming the incident said that agitated over Mann coming to ‘Shaheedi Samagam’ in a drunken state, the youth were so agitated that they may have thrashed him but he saved the situation by intervening in the matter.

Terming it as a serious matter, the Sikh Coordination Committee has decided to bring the matter into the notice of AAP chief and Delhi chief minister Arind Kejriwal.

Bhagwant Mann has denied the charge and said that he had gone to the stage but when he came to know that only Chhotepur would be allowed to speak as representative of AAP, he came down. Citing another reason behind leaving the stage he said, Stage host had announced time and again that too many people were on the stage and it could crash. Mann said that Daduwal even announced that people who have already spoken and who are not to speak from the stage should go down. So, there was no point sitting on the stage and I came down, he said.

He alleged that it was a conspiracy to defame him.

However, besides stating above, Bhagwant Mann also said that during his presence at the venue he suspected that suspicious persons were keeping any eye on him and might harm him. He said that he does not have any security and as such when he wanted to leave some youth asked him why he had not raised the issue of Bapu Surat Singh Khalsa in the parliament.

Mann said that as the youth started speaking against him, he thought it fit to leave the venue.

Bhagwant Mann claimed that this was an attempt to malign his image and divert the attention of the people from real issues as he has been vocal against the government and the Akalis.