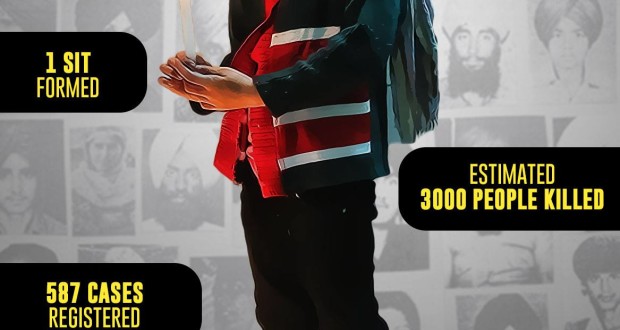 In November 1984, at least 3000 Sikh men, women and children were killed across four days of killing and looting that followed the assassination of Prime Minister Indira Gandhi in Delhi.

Sikh men were dragged out of their homes by mobs and shot dead while others were hacked to death, or doused with petrol and burned alive. Numerous Sikh women were raped.

A number of official commissions of inquiry were appointed to investigate these massacres. While some of them found evidence of the compliance of police officials and political leaders from the Congress party in systematic attacks against members of the Sikh community, very few people were convicted in cases related to the violence. After the massacres, the Delhi police, citing lack of evidence, closed investigations into hundreds of cases. Investigations into many other cases, have not been completed even after 30 years. Only a handful of police personnel charged with neglecting their duty and offering protection to the attackers have received any form of official punishment.

Amnesty International India will continue to mobilize more people and continue campaigning to ensure that justice does not continue to be denied.

2015-10-31
SSNews
Previous: Makkar again does a Flip-Flip on Jathedars’ Removal
Next: Punjab Government continue to hold 19 Sikh activists in Jail