The university has been pulling down these posters, the CBC reported. The flyers were believed to have been distributed by Immigration Watch Canada, a group that advocates dramatic reduction of immigrants in the country, according to the York Federation of Students.

“We are disturbed and appalled by these blatantly racist flyers and the actions of Immigration Watch Canada,” Mithilen Mathipalan, Vice-President Equity of the York Federation of Students, said in a press release. “The diversity of the York community is a source of strength and we will not tolerate any kind of hate speech that fosters an unsafe environment for students.”

This isn’t the first time the anti-immigrant group has been accused of distributing racist material. The students federation alleged that the group had recently ‘delivered xenophobic and anti-immigrant materials’ to homes in the Brampton area, where many of its students reside.

One of its posters’ with a picture of a group of white people and below it a group of Sikhs at a rally captioned “The Changing Face of Brampton” had surfaced and caused outrage on social media in April.

“No one should be subjected to such hateful and offensive messaging on their campus or in their community,” said Mathipalan.

According to CBC, the university has sent a notice to the group responsible for the flyers, asking them to remove the university logo and its photographs from their posters. 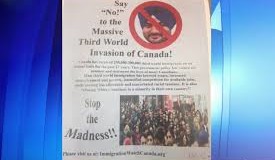