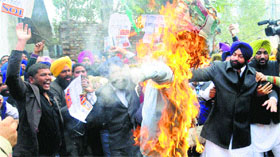 Mohali, Punjab: Leaders and workers of the Youth Akali Dal (YAD) of Mohali district staged a protest outside the Deputy Commissioner’s office here today and demanded that Congress vice-president Rahul Gandhi should reveal the names of the party members who were involved in the 1984 Sikh genocide. They also burnt an effigy of Rahul Gandhi and demanded that he should be produced before the CBI.

Reacting to Rahul Gandhi’s remarks on the 1984 Sikh massacre, Jassi demanded that Rahul should testify before investigating agencies and courts where the appeals regarding the Sikh genocide were being heard. He said the CBI should investigate Rahul Gandhi and he should be made to reveal their names. “A number of Congress politicians were responsible for instigating the violence against Sikhs. But very few were identified and cases were pursued amid hurdles. So, Rahul should expose all the culprits,” he added.

Describing the Congress as a “double-faced” party, Ramoowalia said the Congress claim secular credentials but it had never dissociated itself from the Congress leaders facing serious charges related to the Sikh genocide.

Previous: SC stays execution of Bhullar
Next: Will intensify stir if culprits not named: SAD