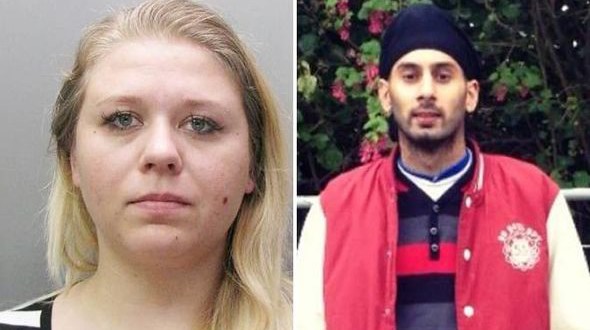 London, UK: A 31-year-old woman has been sentenced to six years in jail in the UK for killing a Sikh man while driving a car at over 110 km per hour and texting and talking on two phones. Marina Usaceva, originally from Latvia, crashed her Jaguar into the back of 27-year-old Sukhdeep Singh Johal’s Peugeot in Cambridgeshire on March 15 last year, causing the death of the biomedical science graduate, The Independent reported. Prosecutor Georgina Gibbs told the court that Usaceva was using not one but two phones at the time of accident, even as she was driving at over 110 km per hour.

Usaceva, the mother of an eight-year-old child, denied using phones while driving, but evidence collected by the police showed that Usaceva used one phone for sending and receiving text messages and the other phone for making calls and receiving three incoming calls in the 20 minutes leading to the crash. Pronouncing the judgement, judge Sean Enright said, “If you were not sending texts at the time, then you were fiddling with your phone and that is what caused this collision. “In my opinion there is not a scrap of remorse. Mobile phone use while driving is a plague on our society,” judge said. The court heard she had previously been caught twice using her phone behind the wheel and that her licence was endorsed in 2009 and 2012.

Outside the court, Johal’s father Buhupinder said that no sentence would be enough to console his family. “Even 60 years wouldn’t be enough, but this is some kind of justice. The only thing we can hope is that others will learn from this,” Buhupinder said. Victim’s father also recalled how his son was rescued from a house fire when he was one-year-old by wrapping him in a turban and throwing outside from a window. “We tell ourselves this was a miracle and we had 26 years with him that we might not have had,” he added.