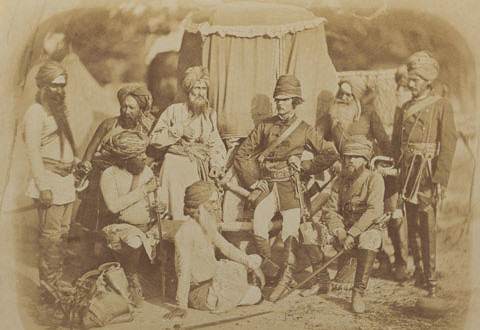 Anglo Sikh Wars brought an end to the Khalsa rule in Punjab. These two series of wars, First Anglo Sikh War and Second Anglo Sikh War left Sikhs leaderless. The Dogra generals who lead Sikh armies were in alliance with British and reaped a profit of their own by getting small kingdoms (like Kashmir). In the years that followed the Anglo-Sikh wars of 1849, sikh armies were disbanded by the British imperialists. Then happened the mutiny of 1857, which was nothing more then an attempt by Marathas to bring back the old order of Mughals.

The biggest reason why Sikhs were loyal to British during mutiny of 1857 is that it was Bengali and Bihari Sepoys who had fought in the British army that brought the Sikh Punjabi Kingdom down. The Sikhs felt no pity for their cause as mutiny was started by them. Another one is that the figurehead of the rebellion was the Mughal “Emperor” Bahadur Shah Zafar II. The Mughals had been the historical enemies of the Sikhs with several of the Sikh gurus gained matyrdom at the hands of the Mughal kings. Again they felt no sympathy for a cause whose figurehead was a Mughal King. 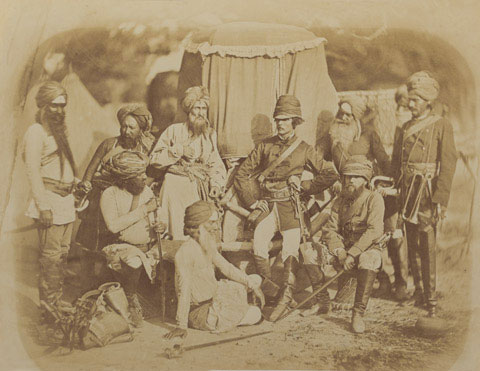 Mutiny in British armed forces was encouraged and several hundreds of British women, children were murdered by these mutineers, all over North India. Eighty Years Bahadur Shah Zafar, from the lineage of Mughals was asked to take up the leadership of mutineers, which he reluctantly agreed. During the Mutiny of 1857, the Muslims sought restoration of the rule of Muslim princes and rulers, and the Hindus hoped to put the Maratha rulers back into power. The princes of the two communities had a unity of purpose in putting up a common front against a common enemy, the British.

Moreover, the situation in the Punjab was quite different from the one that prevailed in the rest of India. An important and the main factor was that the Sikhs had nursed a serious grudge against the Purbias who, despite the Sikhs having never given them any cause for offence, had by their betrayal and other overt and covert acts, helped the British during the Anglo-Sikh wars and later in the annexation of Punjab.

The British used the Sikh grievance and the consequent “natural hatred” towards lhe Purbias. Kavi Khazan Singh in his work, ‘Jangnama Dilli’, written in 1858, mentions that the Sikh participation against the Purbia soldiers was in reaction to their boast that they had vanquished the Sikhs in 1845-46 and in 1848-49.

Another contemporary observer noted: “The animosity between the Sikhs and the Purhias is notorious. The former gave out that they would not allow the latter to pass through their country. It was, therefore, determined to take advantage of this ill feeling and to stimulate it by the offer of rewards for every Hindostanee sepoy who should be captured. The bitter memories of Purhia co-operation with the British were so fresh in Sikh minds that any coalition between the two became impossible. The people who now claimed to be fighters for freedom were the same who, eight years earlier, had actively helped the British to usurp Sikh sovereignty. On top of that they were trying to bring back the same Mughal empire which over the years had wreak havocs on Sikh Gurus and famous Gursikhs.

The pleas of Purbias were so hollow and incongruous with their earlier conduct, that they fell on deaf ears of the agprieved Punjabi Sikhs, Hindus and Muslims whose independence they had helped the British to roh. Besides, it is a well-accepted view that the risings in 1857 were just revolts by the princes to regain their feudal or territorial rights. It was far from being any ideological struggle for any common Indian interest.

The Cis-Satluj chiefs of Patiala, Malerkotla, Kalsia, Nabha, Faridkot and Jind, along with their mercenary forces, rendered full help to the British in suppressing the rebellion. These chiefs owed their existence to the British and were always outside the main Punjab, being hostile to Ranjit Singh. They still remembered with gratitude the support extended to them hy the British against Maharaja Ranjit Singh. But for the British protection, Ranjit Singh would have overpowered them long ago.

This mutiny led British to recruit for their armed forces heavily among the communities which had been neutral to this rebellion. Especially, Gurkhas, Rajputs of Rajasthan, Punjabi Muslims and Sikhs. Sikhs started enlisting with British forces and were thus back to the profession of their liking, the military services.

Ninety Years later when India became independent Indian leaders decided to call the Mutiny of 1857 as “The first war of Independence”, which in reality was the last war of Mughals.