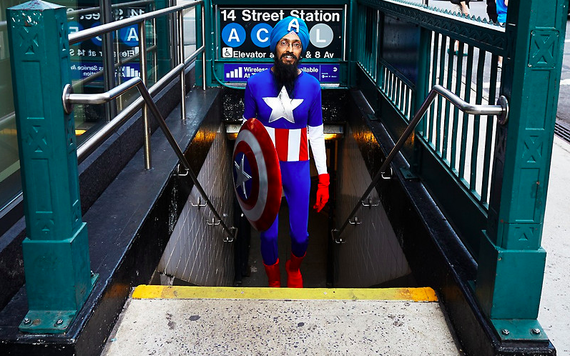 When Captain America Wears a Turban, What Does He Fight For?

Comments Off on When Captain America Wears a Turban, What Does He Fight For? 562 Views

Not all superheroes are fictional. For example: Vishavijit Singh, the first Sikh Captain America. An editorial cartoonist by trade, a few months ago he suited up as a real-life turbaned and bearded version of Jack Kirby’s strongman and strode through New York City, to promote his Sikh Comics while fighting religious and ethnic stereotypes. As he recounted for Salon:

People shook my hands, and a few literally congratulated me. The celebrity-of-the-moment experience was a little overwhelming. But I was jarred out of that trance by a few negative outliers. One man tried to grab my turban. Another yelled, “Captain Arab.” And yet another: “Terrorista!”

Recently, I had the opportunity to question the Captain.

You are a cartoonist. What are your favorite themes when it comes to superheroes?

My favorite theme in this saga is “compassion.” At first glance this word seems at odds with superheroes. But the impulse to put your life at risk, to use all powers at your disposal with the goal to confront injustice, tyranny, intolerance is at its base level rooted in empathy, love, and affection.

A superhero can be guided by anger and hatred to take on villainy also. But ultimately hate will sour the source itself. The superhero spirit guided by compassion will survive the scars of violence even if the physical body perishes in the battlefield.

Did you embody Captain America because you are made to feel different, like an outsider in NYC?

I have lived in the shadows of New York City since just before 9/11. My creative juices have been nourished by the vibrant soul of this great city. There have been moments when New Yorkers have called me names like “Osama,” “Taliban,” and told me “Go back home.” But this globe of a city has always recoiled to correct itself with a random smile from a stranger or getting distracted by its ever-churning diversity and consuming me as a drop in its vast ocean of life.

Is being a cartoonist and a comic character a means of nestling into American culture?

My inspiration to engage in the art of editorial cartooning comes from a legion of contemporary and legendary giants in America, from Jules Feiffer to Ed Sorel to Art Spiegelman to Mark Fiore to Ann Telnaes, just to name a few. I have soaked in the art of analysis, a way of thinking mastered by this lineage of cartoonists who serve as my teachers. Armed with this skill I have transported the world of Sikhs here in the U.S. and beyond into the 2D confines of my cartoons. For me the art of engaging in this medium fortified by the freedoms afforded by our constitution is a quintessential American experience.

Are there any restrictions placed on you from being a Sikh that impact your art?

Over the years a few Sikhs at times have confused my work for being inspired by religion just because I happen to be one of the very few Sikh editorial cartoonists around the globe. Non-Sikhs at times fall into this trap also. Novelty of being the only Sikh editorial cartoonist in North America fools people at times into thinking my inspiration is tied to my faith based identity. Being a Sikh, a student of life only motivates me further to explore cracks in our political, social, cultural, and religious realities.

How do you view your art? As weapon? As release? As expression?

As a survivor of genocidal massacre of Sikhs on the streets of India in 1984, my work that focuses on those who orchestrated the pogrom is definitely a weapon. It is targeted to pierce the information firewall still in place today, hell bent on holding back truth and justice. This is a recent work that is example of this.

As someone who has been target of stereotyping all my life, I create works as a release of my frustrations. Sometimes it is with a sense of knocking on people’s head with a “duh” moment.

Then there is a whole range of work that focuses on the expression of my wild imagination colored with turbans and beards. As a perfect example the French designer John Paul Gaultier was inspired by the Sikh turban for his spring 2012 collection. That in turn inspired a collection in my own image.

Was your Captain America bit just your 15 minutes of fame, or is there a larger strategy?

The Captain America outing was a result of a serendipitous coalescing of events. My illustration created for the 2011 Comic Con, a photographer’s vision, and the Milwaukee Massacre of Sikh worshippers in 2012 created the perfect storm for me to don a costume for the first time in my life. Our goal was to spark a conversation and push perceptual boundaries. Besides knowing all eyes would be on me we did not know what else to expect.

So what was the outcome?

I was getting personal messages from people representing all walks of life. Totally Biased With W. Kamau Bell was inspired by this story to have me step out again for a second outing. The ensuing video segment has started a new round of viral connections.

Okay, but now that you’ve established yourself as the first Sikh Captain America, what is your next act of patriotism?

The first chapter of Sikh Captain America is still unfolding. The overwhelming response from people across the United Stated and beyond is working as an impetus for next chapters.