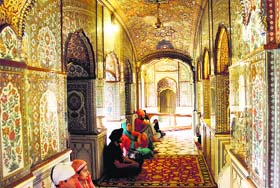 Amritsar, Punjab: Restoration work on the interiors of the sanctum sanctorum at the Golden Temple is expected to be over by the month end. The effort initiated by the SGPC by roping in experts has infused a fresh lease of life into the wall paintings. Sources said the restoration of wall paintings in the “parikarma” on the first floor had been completed and now work in the passage area was underway.

The wall paintings in the area where Guru Granth Sahib has been installed will be carried out in the end as special arrangements will have to be made for it.

A team of 10 members, comprising conservation experts and artists, are on the job to restore sheen of the precious artwork inside the holy shrine. Wall paintings on the first floor involve the most intricate work and it took the team almost six months to restore these. There was a considerable flaking in some areas and artists had to “reconstruct” the lost part of the paintings while taking a clue from the existing pattern. The team is yet to take up the work of reconstructing lost or deteriorated parts on the roof of the first floor as it involves precious “gach” work.

SP Singh, a conservation expert associated with the project, said they were carrying out the restoration work while ensuring that the originality and the aesthetics remained intact. He said most of the work on the first floor was complete. He said they were at present assessing as to how to go about the preservation of gold work inside the sanctum sanctorum. The restoration work was preceded by compilation of a detailed damage assessment report in which the entire wall paintings were documented. It took the experts a couple of months in preparing the report before they could finally embark on the restoration work in December last year. The SGPC authorities had earlier covered the artwork on the first floor with glass enclosures to protect these. However, it still resulted in flaking due to high moisture. The damage was more in the arches as these could not be covered with glass.

The SGPC has already clarified that there will be no tampering with the ancient artwork and all efforts will be made to preserve its originality. This is the first time ever that the restoration work on the interiors of the shrine is being done. The gold-plating and the artwork at the shrine dates back to the Maharaja Ranjit Singh era. The interiors boast of rare architecture comprising “mohrakashi”, “tukri” and “gach” work. The gold-plating inside the shrine has turned black apparently due to rising pollution while at a few places it has lost grip on the walls. Similarly, the artwork on the upper floor suffered damage at various spots, particularly along the staircases leading to the top floor.

Earlier, the gold plates on the outer walls of the shrine were replaced in 1999 after a gap of 170 years. The task of re-gilding the domes and upper portion was entrusted by the SGPC to the UK-based Guru Nanak Nishkam Sewak Jatha in February 1995, and its completion coincided with the tercentenary celebrations of the Khalsa Panth’s foundation in 1999.