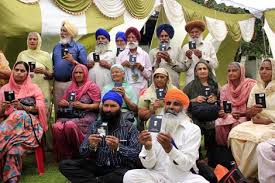 Visa denied, SGPC not to send jatha to Pakistan

Comments Off on Visa denied, SGPC not to send jatha to Pakistan 192 Views

SGPC chief Avtar Singh Makkar condemned the move of the Pakistan High Commission, saying, “We had sent a list of pilgrims to the Pakistan High Commission for issuing visas for the ‘gurpurb’, but they declined to issue the same, following which we decided not to send our jatha.” He made it clear that the SGPC would observe the ‘gurpurb’ in India on June 1 only and also appealed to the Sikhs across the world to follow the amended calendar. He also hit out against the Evacuee Trust Property Board (ETPB), which looks after the gurdwara affairs in Pakistan, saying that its policies are “dangerous and misleading for Sikhs”. He said the Sikh community didn’t need any permission from the ETPB to observe their ‘gurpurbs’, adding that the Sikhs would only follow the directions of the Akal Takht.

DSGMC president Manjeet Singh GK also confirmed that they had also got the passports of the pilgrims back from the Pakistan High Commission as they too have decided not to send their jatha to Pakistan. A total of 500 pilgrims were supposed to leave for Pakistan to observe the martyrdom day of Guru Arjan Dev there. Out of these 500, half were a part of the SGPC jatha. In another development, Makkar has also flayed the alleged incidents of sacrilege of Guru Granth Sahib in Pakistan.

Will send jatha to Pakistan: Sarna