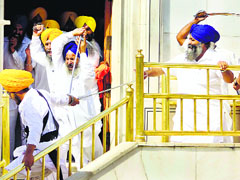 Comments Off on Violent clash at Akal Takht, 12 hurt 689 Views

Amritsar, Punjab: Bloodshed and intense pro-Khalistan sloganeering marked the 30th anniversary of Operation Bluestar as at least 12 persons, including six SGPC employees, were injured in a clash that broke out among SGPC task force members, SAD (Amritsar) activists and other radical Sikh groups at Sri Akal Takht Sahib minutes after the programme to mark the occasion concluded in the morning.

This is for the first time in the last three decades that the event witnessed such a clash.

The programme had ended smoothly following the ‘bhog’ ceremony and Akal Takht Jathedar Giani Gurbachan Singh’s address to the community.

The trouble broke out when SAD (Amritsar) president Simranjeet Singh Mann sought microphone from the SGPC staff to address the gathering from the Akal Takht rostrum.

When SGPC employees declined to hand over the microphone to him, he came out of the Akal Takht and started delivering his address on a battery-operated microphone, but his voice was not audible. His supporters, in the meantime, again asked for the microphone from an SGPC employee, Bhai Satnam Singh. This led to a scuffle in which an SAD (Amritsar) activist, Shingara Singh, was injured.

The word about the clash spread fast and soon a large number of activists of SAD (Amritsar) and other radical Sikh outfits gathered inside the Akal Takht.

The SGPC task force members led by Darbar Sahib manager Partap Singh also reached the spot. A free-fo-all followed in which rivals brandished swords, spears and lathis. The clash lasted around 10 minutes and resulted in injuries to six SGPC employees as also some activists of radical Sikh outfits. Turbans from both the sides were tossed in air during the confrontation. Some mediapersons and devotees were also injured in the melee.