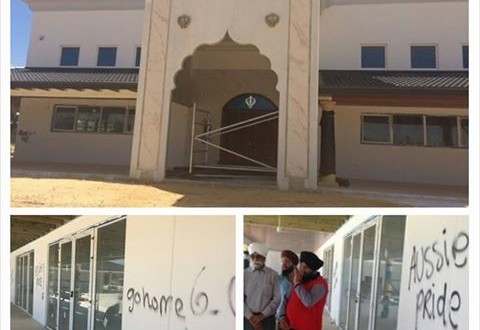 Comments Off on Vandals target Gurdwara with Anti-Muslim graffiti. 314 Views

The multi-million dollar Gurdwara, which has been under construction in Bennett Springs for more than two years and is due to be completed in February, was vandalised around 1.30am by two offenders who sprayed offensive messages.

Two people were captured on CCTV about 1am this morning wearing dark clothing, their faces covered.

One of them climbed onto the other’s shoulders to spray over the camera.

Sikh Gurdwara Perth founding member Satjit Singh said it was disappointing that the Gurdwara was targeted.

He said the vandals had obviously thought they were targeting an Islamic mosque. They did not understand the religious difference between Sikhs and Muslims.

“This temple belongs to the Sikh community and we have no relation with any other religion,” he said.

“All Sikhs, wherever in the world they have settled, they are very faithful to the country where they settle.”

Damage to the building is going to cost $40,000 dollars to repair.

Previous: SGPC chief to lay foundation stone of Sikh centre in US
Next: Kin of Sikh Genocide victims to get Rs 5 lakh compensation