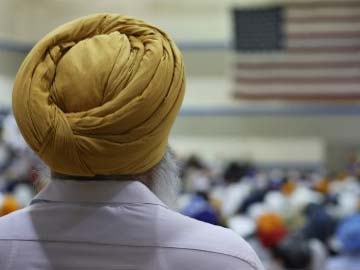 Pennsylvania, USA: As per a release by US based civil rights organization, United Sikhs, [l]ast year, the George W. Hill Correctional Facility in Pennsylvania USA refused to allow an elderly Sikh gentleman to visit his son, a United States Military Veteran, without removing his turban. He had already successfully passed the security check, but was then asked by the guards to remove his turban for checking and to leave it outside. As a devout Sikh, he refused. In a desperate attempt to see his son, the father tried to compromise with the guard by lifting his turban so the guards could see there was no hidden contraband. Despite this, the guards insisted that it be completely removed and unraveled. Remaining true to his faith, he chose not to submit to further degradation and waited patiently outside as his wife visited their son.

Legal Action Taken:
As per release the United Sikhs legal team took immediate action to address this discriminatory act against their client. Ademand letter was sent to the correctional facility demanding the immediate remedy of religiously intolerant security protocols because the requirements of the security protocol in place are in direct violation of the Religious Freedom Protection Act of Pennsylvania. Specifically, Section 4 of the Act states that an agency must enforce the least restrictive means of furthering the compelling governmental interest in assuring security is not breached.

Accordingly the United Sikhs informed the facility of the need to come up with respectful means of screening the turban, since requesting a Sikh to remove is turban is not the least restrictive means of ensuring security. Alternative security procedures include: metal detectors, wands, and self-pat downs. Furthermore, the facility already makes religious accommodations for Muslim women.

United Sikhs Staff Attorney, Manmeet Singh emphasized in the demand letter, “asking a Sikh man to not only remove his turban, but to leave it outside, is extremely offensive and completely against the Sikh religion. The turban is an important article of his faith that should never be removed outside of the home. Our client should not be forced to choose between remaining true to his faith and visiting with his son at the facility.”

In response to the letter, United Sikhs received a call from the correctional facility’s counseland despite our requests for an accommodation, no resolution was reached for a respectful screening of the turban. On December 3, 2013, letters on this matterwere sent to other departments in Pennsylvania addressingourconcerns. A complaint was also filed with the Department of Justice, Civil Rights Division.

Victory
Since the past three months, the security guards areno longer askingthe father to remove his turban when he’s visiting the facility.The facility has clearly, yet discretely, amended its security protocol to allow turbans for Sikh visitors.

Back in Nov.2005, United Sikhs and the law firm of O’Melveny & Myers LPP filed a lawsuit in Federal Court to enforce a Sikh prisoner’s right to practice his religion and to ensure that Sikh prisoners have the same rights as other prisoners. The plaintiff, 24-year-old Navdeep Singh, a devout Amritdhari Sikh, who started serving a 5-year prison sentence in January of that year, had been on a liquid diet since June 6, 2005 to protest the violations of his religious rights. The complaint, which was filed in the United States District Court for the Southern District of New York, challenged the practices of New York Department of Correctional Services’ (DOCS) personnel as gross violations of Navdeep Singh’s religious rights in prison.

“As a Civil Rights Organization, United Sikhs is dedicated to its advocacy efforts and is happy to report to the community that our commitment to this matter has led to a successful religious accommodation and favorable outcome for our client. We will continue in our advocacy efforts to obtain a clear written policy change, and stronger implementation of existing policy”, the release reads further.