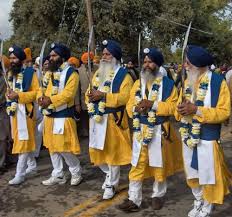 Yuba City, California: Thousands of devotees across the US turned up for the Nagar Kirtan (35th Sikh Parade) to mark the anniversary of the coronation of Guru Granth Sahib, the holy scripture of Sikhs at Yuba City in California on Sunday.

Led by the Panj Pyaras or the five Sikh clerics, the religious parade was taken out about 125 miles from the San Francisco Bay area. Yuba City has developed into a trading and service centre. The city is known for having a sizeable Sikh community.

Each year, on the first Sunday of November, Sikhs from the United States, Canada, India, the United Kingdom and the rest of the world commemorate the coronation of the Guru Granth Sahib in 1708 by the Sikhs.

Sikh devotees thronged in large numbers to pay obeisance to the Guru Granth Sahib at the gurudwara, built in 1969 on the 500th birth anniversary of Guru Nanak.

Tajinder Singh Dosanjh, a senior member of the committee, said over 85,000 devotees from the US and other countries had assembled for the parade. He said it helped people to meet each other and offered a platform to Sikhs to discuss their issues.

Flower petals were strewn from a helicopter hovering above the ceremonial dais and the path of the parade. The devotees attended a free langar (community kitchen) on the roadside. Many US Congressmen attended the parade.