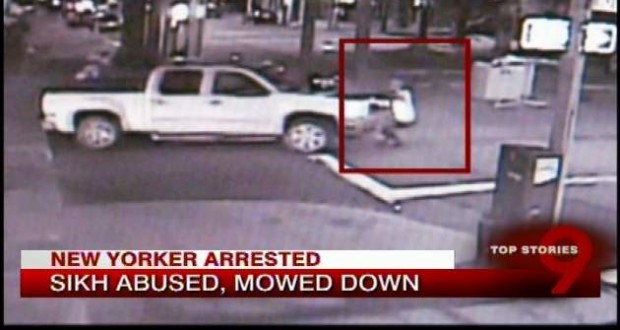 New York, USA: A 55-year-old man has been arrested here on the charges of calling a Sikh man a ‘terrorist’ and mowing him down with his pick-up truck, in an apparent hate crime.

The police in Queens arrested Joseph Caleca of Setauket in Suffolk County and charged him with attempted murder and hate crime, ABC 7 News reported.

Caleca had attacked 29-yearold Sandeep Singh, who was seriously injured when he was hit by the pick-up truck and dragged nearly 30 ft on a public street in Queens following an argument on July 30.

Caleca had called Sandeep a ‘terrorist’ who should “go back to your country”.
Investigators made the arrest after gathering information on vehicles that were in the area at the time of the incident.

Sandeep was treated at Jamaica Hospital for abdominal and back injuries.

Just days after the attack on Sandeep, another Sikh man, Jaspreet Singh Batra, a medical scientist, and his mother were attacked by a group of teenagers and called ‘Osama Bin Laden’ in an apparent hate crime, sparking outrage and prompting the Sikh community to demanded that violence against them must end.

Rights group Sikh Coalition has called for a hate crime investigation into the incident.
The group has also called on the city government and police leaders to enact policy reforms to address violence and discrimination against minority communities in New York city.

“How can we expect the New York city government to prevent bias attacks against Sikhs when the government itself is biased against Sikhs? We need real reform, and now,” he said.

The group said hate crimes and discrimination against Sikhs were “compounded by the fact that the NYPD actively discriminates against turbaned Sikhs who wish to serve as lawenforcement officers.”

It said while turbaned Sikhs serve as police officers in Canada, India and the UK, they are not permitted to serve in the NYPD.

The Sikh Coalition has called on government officials to create a task force to systematically address violence and discrimination against all communities in New York city.

Previous: SGPC planning to speed up work on its wing in United States of America
Next: Son of Oak Creek Victim Falls Short in US House Bid