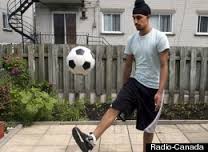 Ontario, Canada: Following a meeting of the International Football Association Board in Zurich, FIFA has decided to lift a ban on head covers worn for religious purposes. This decision impacts both Muslim women and Sikh men who are required by their faith to wear religious head wear.

After FIFA expressed concerns of safety concerns, a two-year trial took place to see if head wear affected performance; no such effect was found. The rule change will go into effect in June 2014.

Anisha Singh, Attorney and Policy Advocate for UNITED SIKHS, stated, “This is a step in the right direction for the understanding that religious head wear does not pose threats to safety. It brings hope that the turban ban in effect in France, and being considered in Quebec, will also be put to rest soon. The United States military has also expressed concerns of religious head wear posing a threat to safety, and UNITED SIKHS will continue to fight to get such bans and measures reversed as well.”

“UNITED SIKHS was the only organization to obtain consent from parents of Sikh youths in Quebec to fight for their concerns regarding the patka ban in soccer there. We took the issue with FIFA, the Sports Minister, and all other related authorities. The issue was prominently discussed during the Canadian Sikh Summit in the Canadian Parliament in 2013. FIFA ultimately gave the positive decision to allow patkas to be worn by Sikh youth while playing Soccer.” Deepinder Singh, Community Advocate for UNITED SIKHS, said.

UNITED SIKHS has also fought and won cases involving the turban ban in France, and advocated against any proposed turban ban in Quebec, through advocacy efforts worldwide.

Previous: It’s a poll gimmick, say Bhullar’s kin
Next: Sikhs protest against news channel over use of Panj Piyaray