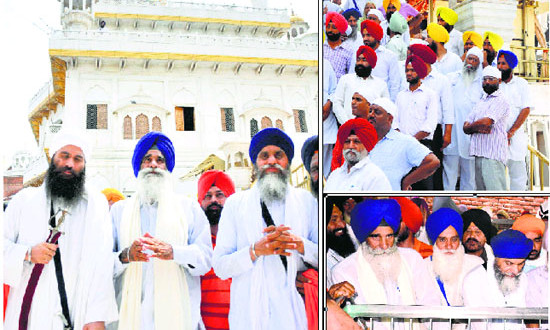 Amritsar, Punjab: Members of the newly constituted Haryana Sikh Gurdwara Management Committee (HSGMC), led by its president Jagdish Singh Jhinda, today visited the Golden Temple. Jhinda, however, chose not to pay obeisance at Akal Takht in view of his excommunication from the panth.

Didar Singh Nalvi, another excommunicated HSGMC leader, could not make it to Amritsar due to health reasons.

Though Jhinda himself opted not to visit Akal Takht, the SGPC had put in place tight security arrangements. It had deployed its task force members in an apparent bid to stop Jhinda in case he tried to make an entry. Besides, police personnel in civvies were also present around to ensure peace during the HSGMC team’s visit.

A cautious Jhinda came out of the Golden Temple and performed ‘ardaas’ in front of Akal Takht. His team members too didn’t enter Akal Takht. The SGPC officials justified the heavy presence of the task force members, contending that it was their responsibility to manage the affairs and ensure that nothing untoward happened. They also made an effort to persuade Jhinda and his men to leave the area in front of Akal Takht at the earliest.

When Jhinda arrived, three of the five gates of Akal Takht were shut. The doors were opened as soon as mediapersons started clicking pictures. Sources said the SGPC had already conveyed to Jhinda that he would not be allowed to proceed towards Akal Takht. Sources said Jhinda himself decided not to pay a visit to avoid any confrontation with the SGPC.

Throughout his visit, there was tension in the air even as the SGPC staff worked overtime to ensure that everything went on smoothly. An SGPC official was also deputed to escort the new HSGMC team during their visit to the holy shrine.

They were not officially welcomed by the SGPC, but Khalsa Action Committee chief Bhai Mohkam Singh felicitated them by presenting them ‘siropas’ before they stepped into the Golden Temple. The HSGMC team also performed ‘ardaas’ at Gurdwara Thada Sahib and the Operation Bluestar Memorial before partaking ‘langar’ at Sri Guru Ramdas Langar Hall. They also washed utensils at the ‘langar’ facility.

Talking to mediapersons, Jhinda said the HSGMC would hold an executive meeting tomorrow. After the meeting, he said, they would shoot off missives to Punjab Chief Minister Parkash Singh Badal and SGPC president Avtar Singh Makkar, urging them to vacate Haryana gurdwaras where armed SGPC task force members, Akali workers and MLAs had been deployed.

He claimed the SGPC control over the Haryana gurdwaras had come to an end two days ago when the HSGMC team was sworn in.

Referring to the Punjab Reorganisation Act, he sought the distribution of Chandigarh gurdwaras in the ratio of 60:40 between SGPC and HSGMC. He said they would neither disturb peace nor violate law and order. He said the HSGMC was established as per the same law under which the SGPC and the DSGMC came into being. He didn’t comment on his excommunication or the latest Akal Takht directive restraining the team from taking charge. He said, “We are here at the holiest Sikh shrine to seek blessings before we start working in Haryana.”

Who all were along