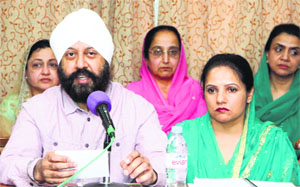 Jalandhar, Punjab: The Sikh Council, UK, has started a “voluntary return scheme” to rescue illegal Punjabi immigrants in the UK. It has already rescued 30 such persons since November last year.

Under the scheme, the council arranges air tickets, coordinates with the British Government and gets the identification of immigrants done from the Punjab Government.

Balwinder Kaur, head of operations, told media that a large number of Punjabis were living in the UK illegally. “The council is assisting people who wish to return voluntarily. We are also identifying such people who are living in abject poverty and convincing them to return to their country,” she said.

Gurmail Singh, council secretary, said: “We have noticed that there were several Punjabi girls, who came to the UK on a study visa and later declared illegal migrants. No business establishment gives employment due to the fear of heavy penalty. Such girls are being forced into prostitution”.

The council has so far received 180 inquiries from Punjabi migrants wanting to return home since the scheme was started in November last year. “We have already sent 30 migrants to Punjab at our expense. Of these, 10 girls were rescued from a prostitution racket,” he said.

The council has also made a documentary “Broken Dreams”, which highlights the plight of Punjabi students and illegal migrants living in the UK in abject poverty. The film shows how Punjabis are sleeping underneath bridges in freezing temperatures. Though some gurdwaras have offered help, the rising number of such people is adding to the problem.