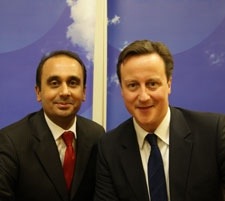 I was 17 when I first saw on TV the events and outcome of Operation Blue Star. As a British Sikh living in the UK, it was a harrowing experience that will live with me for the rest of my life. I felt the same feeling when shortly after the New Year, documents were released under the 30-year rule that suggested that Britain was involved in the events that unfolded.

By signing the petition, we made our voices heard – and Prime Minister David Cameron ordered an urgent inquiry into the tragic events. That inquiry has now reported its findings, and the Prime Minister has asked me to forward you this personal message:

“Thirty years ago, a great tragedy unfolded at the Sri Harmandir Sahib in Amritsar. Many lives were lost and the scars in the Sikh community still run deep. So when documents came to light a few weeks ago raising the possibility that the then-UK Government was involved in the Indian Army’s operation that June people were shocked, they were angry, and they rightly wanted answers.

I tasked the Cabinet Secretary with getting to the truth. He did so, and there are two main findings.

One: around four months before the events, at the request of the Indian Government, a single UK military officer provided some advice. But critically, this advice was not followed, and it was a one-off.

Two: there is absolutely no evidence of UK Government involvement in the operation itself.

This conclusion has been made after a thorough search of some 200 files and over 23,000 documents.

But let me be clear. I want the dialogue between this Government and the Sikh community to continue.

British Sikhs have made – and continue to make – a vital contribution to our national life from serving in two world wars to running businesses and playing a massive part in our communities today.

I never forget this. I am grateful for it. And I hope the manner in which we have investigated these dreadful events will provide some reassurance to the Sikh community, here in Britain and elsewhere. -David Cameron

Previous: Langar hall should be build by kar sewa not by corporations
Next: Yahoo appoints Gurmit Singh as new India Director