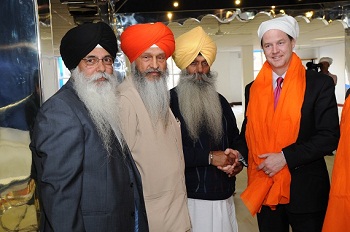 London, United Kingdom: The Sikh Federation (UK) last year arranged a meeting of British Sikh representatives with Nick Clegg, the Deputy Prime Minister and Simon Hughes, the Deputy Leader of the Liberal Democrats at that time. In a more detailed follow up meeting in his office at the Cabinet Office Sikh Federation (UK) representatives suggested in a future trip to India that the Deputy Prime Minister should try and visit Punjab, the Sikh homeland and Sri Harmander Sahib (often referred to as the Golden Temple Complex) in Amritsar.The revelations in January this year under the 30–year rule that the Thatcher-led British Government was directly involved in assisting the Indian army in the military assault on the Sikhs’ holiest shrine in June 1984 that led to the Genocide of thousands of innocent Sikh pilgrims probably put paid to any chance of Clegg visiting Amritsar during this trip.Bhai Amrik Singh, the Chair of the Sikh Federation (UK), who has met the Deputy Prime Minister on more than one occasion said: ‘Even though time may have been limited in his 3-day visit to promote British business we believe the Deputy Prime Minister was either prevented or avoided visiting Amritsar fearing this may re-open the debate around UK Government assistance in the Sikh Genocide in Amritsar in June 1984.

We suggested if he could not visit Punjab he should visit one of the historic Sikh Gurdwaras in Delhi. It was good to see him at Bangla Sahib Gurdwara today, which has been widely reported in the media.’‘However, we believe he deliberately avoided consulting us on the exact arrangements for his visit given our criticism of the coalition government in recent months following the revelations in January and the way this has been handled by them.’‘He may also have been nervous about our advice as we are approaching the 30th anniversary of the Sikh Genocide in Delhi and other cities throughout northern India in November 1984.’‘He would not have been disappointed as we would almost certainly have suggested a more suitable Gurdwara for his visit was Gurdwara Rakab Ganj Sahib opposite the Indian Parliament that is of huge significance to Sikhs.

It was not only where the body of the ninth Sikh Guru who sacrificed his life for the religious freedom of others (the Hindu majority at that time) was cremated, but also one of the many sites where leading Congress politicians (Kamal Nath) led Hindu mobs who systematically burnt alive innocent Sikhs on 1 November 1984.’ ‘UK Cabinet papers from November 1984 that are available under the 30-year rule show the extraordinary lengths the Indian Government took 30 years ago to threaten the Thatcher-led government with pulling out of £5bn worth of contracts unless British Sikhs protesting against the Genocide were silenced.’ ‘Sadly 30 years ago the iron lady bowed to the Indian government pressure, not only in providing military assistance in the June 1984 Genocide in the Sikhs’ holiest shrine, but also silencing Sikh voices of protest in London following the second Sikh Genocide in November 1984.’ ‘Today the British Prime Minister and Deputy Prime Minister are still far more interested in trade and selling arms to India than ensuring justice for the 1984 Sikh Genocide.’