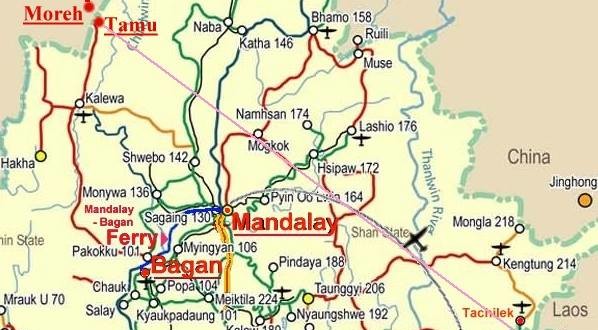 Myanmar, India: Two Sikh traders who had been reported missing from Tamu town in Myanmar were found dead along Manipur’s border with the neighbouring country this morning.

The bodies had multiple injury marks, including burns.

Police said Sanvendar Singh, 30, from Uttar Pradesh, and Daljeet Singh, 33, from Mumbai, disappeared after they reached Tamu, a drive of barely 10 minutes from Manipur’s border township of Moreh, on 11 February 2014.

The two had entered Tamu after getting the required permit from Myanmarese authorities manning border gate number 2.

Sources said the bodies were found on the Manipur side of the border at Jangnomphai village, about 45km south of Moreh in Chandel district.

Police sources declined to speculate on the identity of the culprits and their motive. They said the police had received reports that some villagers had found two bodies. A team from Moreh then brought the bodies to Moreh police station at 2.30pm. The bodies of the traders were later taken to Imphal for the post-mortem.

On 10 April last year, a police commando and a civilian from Moreh, on a fishing trip to Myanmar, 6km north of Moreh, were abducted and killed.

Moreh and Tamu are the gateways to the India-Myanmar border trade. Traders from either side cross the border between 7am and 4pm every day. Sanvendar Singh and Daljeet Singh had arrived in Moreh about a month ago to sell household and school accessories before entering Tamu.

Moreh has been in the news recently over a check-post the Manipur government constructed along the border.

Myanmar said the site where the check-post had been built was part of its territory. The site is between gate numbers 1 and 2.

Even after the mutilated bodies of two Sikh traders were found on Thursday, residents of Moreh decided not to give up their agitations.

The agitators are shutting down the shops and business establishments at Moreh and are not allowing people to cross the international border to buy foreign goods from Naphalong and Tamu markets in Myanmar.

A spokesman of the All Community Organisation at Moreh said that the agitation shall continue until the Manipur government comes out with some concrete assurances. Meanwhile the Manipur police seem to be in the dark about the traders murder that happened deep inside Myanmar.

Reports say that their faces were made unrecognisable with blow lamps. Besides a leg is missing from a body while the other one has one missing arm. Both of them were subjected to inhuman torture during the excruciating interrogation.

The bereaved family members claimed the bodies after post mortem. Security measures have been beefed up to maintain law and order at the border town. So far there is no claim from any group to the gruesome killings.