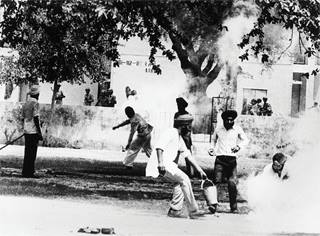 Delhi: In a development that can mean more trouble for Delhi Police in the 1984 anti-Sikh Genocide cases, the prosecution has moved a sessions court seeking trial of four police officers, including the then ACP, for destroying in 1992 records and files of a Nangloi case.

The application was moved recently by special public prosecutor B S Joon before additional sessions judge Kamini Lau, who is hearing the case registered in 1991 with regard to the killing of four persons.

The allegation will also impact the fate of another FIR (no.67/87) in a genocide case related to the killing of five persons and allegedly involving senior Congress leader Sajjan Kumar. The present case was registered in 1991 and was clubbed with another FIR registered in 1987, which had named Kumar as an accused. However, the chargesheet in the 1987 FIR had gone “missing” for 18 years after it was clubbed with the 1991 FIR (in which Kumar didn’t figure as an accused). It was only in 2010 that a court separated the two, clearing the way for filing of a fresh document. Sources claimed the record of the 1987 FIR naming Kumar could also have been destroyed.

The plea for framing of charges against the cops will be decided on Saturday. In an application on 21 January, Joon said the “evidence on record is sufficient to frame charges against the accused, namely then SHO of Nangloi police station, inspector Ram Pal Singh Rana, then SI Dalel Singh, then ACP Amarender Kumar Singh and then SHO R S Dahiya for destroying records relating to the 1984 Genocide in PS Nangloi, deliberately to save the accused in this case despite registration of the present FIR on 28 August, 1991”.

The prosecution has relied on the statement of a prosecution witness, who has claimed “the record of the riots was destroyed on 5 February, 1992 by the then SHO and ACP”. “That the letter dated 26 August, 1991, is specific to the effect that DCP (West) had sought intimation, within 15 days, as to whether the record was required for any purpose, but the accused and aforesaid persons without giving any intimation to DCP (West), destroyed the record on 5 February, 1992 …” the plea stated. The prosecution wants charges of hatching a criminal conspiracy to destroy proof (Section 201 read with Section 120B IPC).