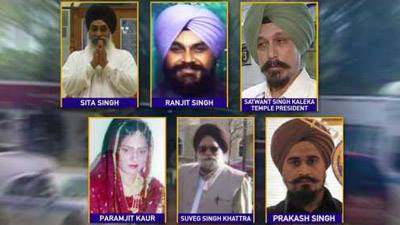 Oak Creek, Wisconsin, USA: Two years ago, a gunman opened fire inside the Sikh Gurdwara in Oak Creek. When all was said and done, six people had lost their lives, and four others were injured — including Oak Creek Police Lieutenant Brian Murphy — the first officer on scene.

Starting at 6 p.m. Tuesday, August 5th, there will be a time of meditation at the Sikh Gurdwara. That will be followed by a Remembrance Ceremony at 8 p.m.

On Wednesday, August 6th, LT. Brian Murphy and Officer Sam Lenda will receive congressional honours for their acts during the shooting.

Other events to honour the victims took place throughout Oak Creek all weekend long.
On Friday, August 1st, members of the Sikh Gurdwara began four days of memorials with a Sri Akhand Paath Sahib.

On Saturday, members of the Sikh community took part in a memorial run/walk — the second “Chardhi Kala 6K.” The Punjabi name refers to a state of constant optimism, which reflects an acceptance of God’s will.

Sunday, August 3rd marked the end of 48 hours of continuous prayer and meditation at the Sikh Gurdwara in Oak Creek. Worshippers and supporters have come from across the country to join in remembering the day two years ago, when tragedy struck.

While the anniversary of the mass shooting is an opportunity to come together, it’s also a day when six families remember their loved ones — gunned down at the hands of a white supremacist living in Cudahy.

“It’s a hard time. It’s two years ago, but I miss my dad a lot,” Palmeet Kaur Rathor said.
Rathor was inside the Sikh Gurdwara as Wade Michael Page entered on a sunny August morning — killing six and wounding four, before taking his own life.

Rathor’s father, Prakash Singh was one of the six killed.

“We just went to the basement and then I saw my dad. He got shot over here. We were hiding in the bathroom,” Rathor said.

Officials believe Page thought he was targeting Muslims — though his motive for the shooting may likely never be known.

Previous: Sikh soldiers on the march in France at the start of the First World War
Next: Former DSGMC Chief Holds Closed Door Meeting with Akal Takht Sahib Jathedar