The Nankana Sahib Massacre refers to the grim episode during the Gurdwara Reform Movement or Akali Movement in which a peaceful batch of reformist Sikhs were subjected to a murderous assault on 20 February 1921 in the holy shrine at Nankana Sahib, the birthplace of Sri Guru Nanak Dev Ji.

In October 1920, a congregation was held at Dharowal, District Sheikhupura to inform the sangat of the the misdeeds being committed inside Gurdwara Nankana Sahib. This shrine along with six others in the town had been under the control of Udasi priests ever since the time the Sikhs were driven by Mughal oppression to seek safety in remote hills and deserts. The priests not only treated the Gurdwaras as their private properties but had also introduced practices and ceremonial which had no sanction in the Sikh faith.

At the meeting, it was unanimously resolved that the Mahant be asked to mend his ways. When Mahant Narian Dass was asked upon to do so, he started making preparations to oppose the Panth instead. He did not feel it necessary to pay heed to the suggestions of the Committee. He was the owner of the estate attached to the Gurdwara with an income of one hundred thousand rupees besides the offerings of the Gurdwara.

Narain Das, with the help of the Government started recruiting a private army and laying in arms. The Government was using every available weapon to make Akali movmement of Gurdwara reform, a failure. Narain Das got the Gurdwara gate strengthened and got holes made in it so that bullets could be fired through them.

In the meeting of Parbhandak Committee on 17 February 1921, it was decided that two jathas one led by Bhai Lachhman Singh and the other by Bhai Kartar Singh Virk (alias Jhabbar) should meet at Chander Kot on 19 February. From there they were to reach Nankana Sahib early in the morning of 20th February, to talk to the Mahant, Narain Das. Upon seeing the preparation of the Mahant, the Parbhandak Committee held a meeting on 19th February, in which it was resolved that the jathas should not be taken to Nankana Sahib on the 20th February. Bhai Kartar Singh Jhabbar was present in the meeting. He was informed about the changes and was told to inform Bhai Lachhman Singh. Bhai Kartar Singh Jhabbar immediately dispatched Bhai Waryam Singh to Chander Kot so that other jatha could be stopped.

Bhai Lachchman Singh, in accordance with the original programme had reached Chander Kot on the night of 19th February with his jatha of 150 Singhs and waited for Bhai Kartar Singh Jhabbar and his jatha.

Bhai Waryam Singh arrived with news not to lead the jatha to the Gurdwara, Bhai Lachchman Singh said to the Singhs of his jatha, “When we have started for a good cause, we should not waste time.” All members of the jatha agreed. Bhai Lachhman Singh got a promise from the Singh’s not to strike and remain peaceful no matter what. After that the jatha prayed for their success of their nobel resolve. After the prayer, as the jatha was about to move forward, Bhai Waryam Singh arrived. He showed them the letter about the new decision of the Committee. Bhai Tehal Singh said,

“Dear Khalsa, we have taken our resolve at the prayer (Ardaas)and cannot turn back now. It is imperitive for us to move forward.”

Thus on the morning of 20 February 1921, the jatha of 150 Sikhs lead by Bhai Lachhman Singh entered the sacred precincts. People bathed in the holy pool (sarowar) and entered the premises of Gurdwara at 0600 hrs. Bhai Lachchma Singh sat in ‘Taabiya’ (Behind Sri Guru Granth Sahib). The Mahant had got the news of their arrival at Chander Kot on the evening of 19th February. He had gathered his men at night and briefed them about their duties.

After the jatha of Singh’s had sat down, the Mahant signalled his men to carry out the predetermined plan. The Sikhs were reciting the sacred hymns when the attack started. Bullets were mercilessly rained on them from the roof of an adjoining building. Bhai Lachhman Singh was struck down sitting in attendance of Sri Guru Granth Sahib. Twenty-six Singhs became martyrs to those bullets in the courtyard while another sixty or so sitting inside the Darbar Sahib became targets of bullets. When the Mahant’s men saw no one moving, they came down with swords and choppers. Any Singh they found breathing was cut to pieces.

Outside the main gate, Narain Das, pistol in hand and his face muffled up, pranced up and down on horseback directing the operations and all the time shouting, “Let not a single long-haired Sikh go out alive.” Bhai Dalip Singh, a much-respected Sikh who was well known to him, came to intercede with him to stop the bloody carnage. But he killed him on the spot with a shot from his pistol. Six other Sikhs coming from outside were butchered and thrown into a potter’s kiln. Firewood and kerosene oil were brought out and a fire lighted. All the dead and injured were piled up on it to be consumed by the flames. The body of one alive Singh said to be Bhai Lachhman Singh was fastened to a tree near by and burnt alive. The total number of Sikhs killed has been variously estimated between 82 and 156. As news reached back to Panjab, 20 Pathans had been arrested, the Gurdwara had been locked and the city was handed over to Army which cordoned it to restrict any Akali movement to take over Gurdwara. Sardar Kartar Singh Jhabbar arrived with his jatha on 21st February. Commissioner, Mr. King, informed him that if he tried to enter city with his jatha army will open fire. Kartar Singh Jhabbar and his jatha of twenty two hundred Singhs did not listen to the Commissioner and kept on moving towards city. At end, Commissioner Mr. Curry handed over the keys of Gurdwara to Bhai Kartar Singh Jhabbar.

On the 22nd/23rd February, the bodies were cremated according to Sikh tradition. Charred, mutilated bodies were collected and torn limbs and pieces of flesh picked from wherever they lay in the blood stained chambers. A huge funeral pyre was erected. Bhai Jodh Singh, in a measured oration, advised the Sikhs to remain cool and patient and endure the calamity with the fortitude with which their ancestors had faced similar situations.The Sikhs, he said, had cleansed by their blood the holy precincts so long exposed to the impious influence of a corrupt regime.

The Mahant, 20 Pathans and other of his group were sentenced by British. Only Mahant and couple of Pathans got death sentence for this crime of more than 50 murders. (The High Court delivering on 3 March 1922, its judgement on Narain Das’s appeal, reduced his sentence to life imprisonment.)

News of the Nankana Sahib massacre shocked the country.

Previous: SGPC paid only 42 lakh to panel of lawyers fighting genocide cases over 30 years
Next: Sikh group seeks action against police officers posted in Delhi during the Sikh Genocide 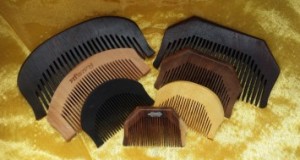 7 Reasons Why You Should Use a Wooden Comb