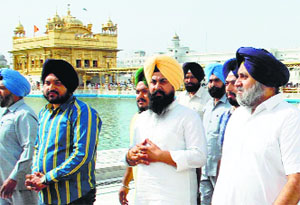 Comments Off on Time to punish guilty of ’84 genocide: Sukhbir 344 Views

Amritsar, Punjab: A day after his Union Minister-wife Harsimrat Kaur Badal appeared non-committal on the issue of the 1984 Sikh genocide, Deputy Chief Minister Sukhbir Badal today switched to damage-control mode and reiterated his resolve for severe punishment for the perpetrators. He said “the time has come to punish them”.

Talking to mediapersons after paying obeisance at the Golden Temple here along with Harsimrat, Sukhbir stated that the SAD would soon discuss the ongoing legal proceedings with the Union Home Minister to ensure proper investigations and to expedite the hearing of the cases. He alleged that the previous UPA Government had tried its best “to shield the culprits and even rewarded those involved with high posts in the party”. He said they were confident that the Narendra Modi government would deliver justice.

To a query regarding the recently concluded Lok Sabha elections in Punjab, the Deputy CM said they respected the mandate of the people. He said the SAD-BJP alliance would introspect and make all efforts to overcome their shortcomings. He said the main focus of the ruling combine would remain on the all-round development in the state.

On AAP’s performance, he said the “party’s bubble would burst soon in Punjab, as it did in Delhi”.

Sukhbir and Harsimrat also reviewed the Rs 78 crore Golden Temple Entrance Plaza project and issued directions to the authorities concerned to complete the construction before the deadline. He said the entire plaza would be open for the pilgrims in August since the flooring of 90,000 sq feet had been completed and the tender of lighting worth Rs 3.41 crore would also be awarded soon to a reputed firm. He also reviewed the construction of multipurpose hall and state-of-the-art information centre. He said there would also be a world-class waiting hall for devotees and tourists. They also took stock of the ongoing restoration work of the Golden Temple’s interiors by holding a meeting with the experts engaged in it.

Harsimrat said “phenomenal growth” in the food processing sector in the country, particularly Punjab, would be her priority and special efforts would be made to improve the financial health of Punjab farmers.