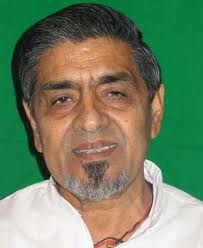 Amritsar, Punjab: The All India Sikh Students’ Federation (AISSF) today said it would contest against Congress leader Jagdish Tytler, if the Congress allotted him the party ticket from the
Delhi North-East seat.

In a statement, AISSF president Karnail Singh Peer Mohammad said the Congress was playing with Sikh sentiments by considering Tytler for the seat.

“If he is given the ticket, it will be a betrayal of the Sikh community,” he said.

Countering SGPC claims that its legal team was fighting 1984 riot cases, the AISSF released documents on the cases registered after the assassination of then Prime Minister Indira Gandhi. He said SGPC chief Avtar Singh Makkar had misled the people on the issue.

Peer Mohammad alleged the Punjab Government had failed to provide security to Giani Surinder Singh, prime witness against Tytler, and he had died under strange circumstances in 2009.

Previous: Jagdish Tytler withdraws nomination for Congress primary from Delhi
Next: 282 Skeletal remains of Kalianwala Khu are not of Sikhs