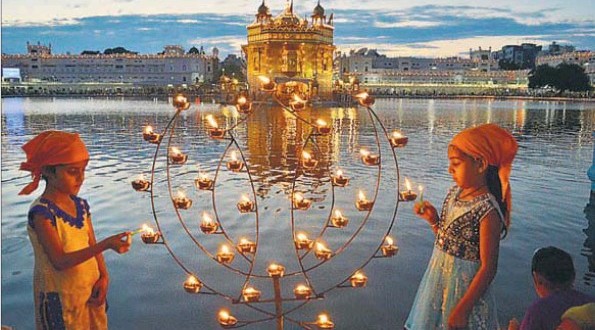 Comments Off on Thousands carry the knowledge home 609 Views

Amritsar, Punjab: Thousands of devotees on Monday paid obeisance at the Golden Temple and listened to ‘kirtan’ on the 410th anniversary of the installation of Guru Granth Sahib at Harmandir Sahib, which Sikhs celebrate as Parkash Utsav of the holy scripture.

In keeping with the tradition, the Shiromani Gurdwara Parbandhak Committee (SGPC) organised an impressive ‘nagar kirtan’ from Gurdwara Sri Ramsar Sahib to Harmandir Sahib. Guru Arjan Dev, fifth of the 10 Sikh Gurus, had compiled the Adi Granth (the First Rendition) at Ramsar Sahib with the help of his devoted disciple Bhai Gurdas.

On Monday, the Panj Payaras (five beloved ones of the Guru) led the ‘nagar kirtan’. Behind them Guru Granth Sahib was carried in a flower-decked van. All along the procession route, devotees paid obeisance to the scripture and organised ‘langar’ (community kitchen).

‘TEACHINGS NOT JUST FOR SIKHS’

The teachings of Guru Granth Sahib are for all humanity, concluded the experts during a symposium at Guru Nanak Dev University (GNDU) to mark the installation anniversary of the holy book.

The Centre on Studies in Sri Guru Granth Sahib had organised this symposium on the interpretation of Gurbani. Vicechancellor AS Brar presided over the event that Sikh scholar Bhai Ashok Singh Bagrian was invited to inaugurate. Patiala professor Balkar Singh delivered the keynote address.

Centre coordinator and director Balwant Singh Dhillon welcomed the chief guest, scholars, and the prominent citizens. The V-C said Guru Granth Sahib was the only scripture holding the status of the living Guru. “The holy book lays stress on meditation, and moral and ethical rules for the development of the soul. The teachings of Guru Granth Sahib are not just for Sikhs,” he added.

The centre carries out indepth study of the scripture. Balkar Singh said that the methods for interpreting Gurbani were given in the holy book and could be understood best by adopting the teachings in daily life.

Bhai Ashok Singh Bagrian the need for understanding the scripture first to interpret it correctly.

Bhag Singh Ankhi, Sashi Bala and Waryam Singh were the other speakers. Centre director Balwant Singh Dhillon presented his paper on the interpretation of Gurbani.

Previous: Holy union in town wedded to tradition
Next: 3 years on, SGPC House in a limbo