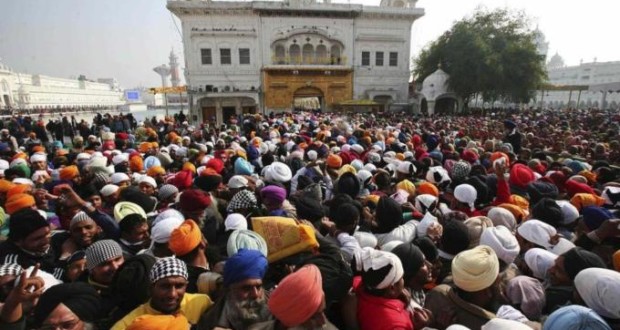 There has been no justice rendered for the Amritsar massacre of 1984.

Murky British connections to the Indian government’s attack on the Golden Temple in Amritsar in 1984 have fuelled demands for full disclosure in UK and India. Prime Minister David Cameron ordered a review when documents released to the public after 30 years showed that India had sought, and Britain had provided, assistance for the operation. The review stated that the documents had been released “inadvertently” and claimed that though the sale of Westland helicopters was being discussed at the time, there was no record linking the two matters.

In parliament British Foreign Secretary William Hague tried to play down British involvement. A British Sikh peer described his statement as “smug and condescending” and questioned why Britain was involved in the Amritsar operation at all. It is unclear why India sought British help in the operation. Not only were the British the former colonial masters of India, they were responsible for the notorious massacre of Sikhs at Jallianwala Bagh – right next to the Golden Temple – in Amritsar in 1919.

In December 2013 three men and a woman – all Sikhs – were jailed in London for the attempted murder of an elderly Indian tourist in 2012. What was taken initially for a mugging gone wrong was revealed to be a case of revenge arising from India’s storming of the Golden Temple in 1984.

The victim was retired Indian general Lt Gen Kuldip Singh Brar, who was visiting London. In June 1984 Brar, himself a Sikh, had led Operation Blue Star, the Indian army’s attack on the Golden Temple, to flush out armed militants. Official accounts acknowledge several hundred casualties, including many pilgrims marking a Sikh holy day.

The militants inside the temple were said to be Sikh separatists threatening the unity of India. Their leader was Jarnail Singh Bhindranwale, who was killed in the operation. But how militant Sikh separatism arose in Indian Punjab is part of the dark underbelly of India’s democratic politics.

In their book Amritsar, Mark Tully and Satish Jacob described how separatist extremism in Punjab was the product of divisive politics in the pursuit of power played to its self-destructive end by India’s Prime Minister Indira Gandhi and her son Sanjay, with the connivance of acolytes like Zail Singh, Congress Chief Minister of Punjab in the 1970s and later president of India.

After Mrs Gandhi and Sanjay were defeated in the 1977 elections following their Emergency rule in India, they looked for ways to break up the coalition that had ousted them. According to Tully and Jacob, on the advice of Zail Singh, Sanjay looked for a religious leader to promote in Punjab to discredit the regional Sikh party, Akali Dal. He chose Bhindranwale from among many little-known preachers. The Congress party promoted Bhindranwale to incite dissensions among Sikhs and even created a political party advocating a separate Sikh state, as a means to project him.

Fighting against Brar in Operation Blue Star was another Indian Sikh general, Shahbeg Singh, who had joined the militants. Shahbeg Singh had once been Brar’s instructor and both had fought in the 1971 Bangladesh war. Shahbeg Singh was credited with organising the “Muktibahini” (Bangladeshi liberation force) and successful insurgency operations in East Pakistan, easing the way for the Indian army’s invasion and victory over Pakistan.

He, too, was killed in Operation Blue Star. Another Indian Sikh war-hero, General Jagjit Singh Aurora, who accepted the surrender of Pakistani forces in Dacca in 1971, criticised the attack on the Golden Temple and India’s violation of human rights in Punjab.

Shortly after the Golden Temple attack, Indira Gandhi was assassinated by her Sikh bodyguards. In the days that followed, thousands of Sikhs were killed in Delhi in attacks allegedly orchestrated by Congress politicians while the Congress government allegedly turned a blind eye.

Revenge, but no justice:

Asked about the killing of innocent Sikhs in 1984, Indira Gandhi’s son Rajiv, who succeeded her as prime minister, was reported to have said that when a great tree falls, the earth shakes. This insensitive remark has come to symbolise the disregard for innocent lives and the failure of the Indian authorities to bring to justice the Congress politicians accused of organising pogroms against Sikhs.

General A S Vaidya, who was chief of army staff at the time of the Golden Temple operation, was assassinated in 1986. Two Sikhs were executed in India for his killing. Brar’s would-be assassins in London are Sikhs who would have been children in 1984. However, this was not the first time that Sikhs have tried to avenge a massacre committed in India, decades later in far-away London.

On 13 March 1940 in Caxton Hall in London, Udham Singh, a Sikh from Amritsar, shot dead Michael O’Dwyer, who had been Governor of Punjab at the time of the Jallianwala Bagh massacre in 1919. The British executed Udham Singh.

While Brar’s assailants have been branded “extremists”, Udham Singh is memorialised in India as a ‘shaheed’ (martyr) who acted to avenge the Jallianwala Bagh massacre. His remains were brought back to India in 1974, taken in procession through Delhi to his village in Punjab, where he was cremated with full state honours. His funeral pyre was lit by Zail Singh, then chief minister of Punjab. Prime Minister Indira Gandhi paid her respects.

Louis Fenech argues that the memorialisation of Udham Singh reflected the political ambitions of the Congress Party, with Zail Singh manoeuvring against both competitors within the Congress and the rival regional party Akali Dal. As the Akalis stood for greater autonomy for Sikhs, by associating themselves closely with a Sikh martyr like Udham Singh, the Congress tried to beat them at their own game.

Those perceived to have wronged Sikhs tend to be hunted down in revenge even years after the event. During the Second World War, many Indian officers and troops of the British Indian Army captured by the Japanese joined the Indian National Army to fight for India’s independence. Unable to bear the hardships of the Burma front as the war turned against them, Major B J S Garewal went over to the British. Sugata Bose recounts in His Majesty’s Opponent that “his Sikh comrades were crestfallen that Garewal, a Sikh officer, had let them down so badly. Soon after war’s end, Garewal was assassinated on a street in Lahore.”

The fomenting of extremism in Punjab by the Congress for political gain, insurgency and counter-insurgency with countless human rights violations, and pogroms against innocent Sikhs, are crimes that have gone unpunished. That denial of justice continues to infect a deep wound, to which British involvement in Blue Star, given their colonial history, adds fresh salt.