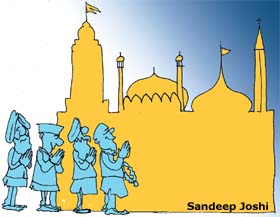 Comments Off on The final destination — Almighty’s home 634 Views

Ludhiana, Punjab: Candidates are visiting gurdwaras, temples, mosques and churches to ensure their win. Spiritual gurus are also being “secretly” visited by their near and dear ones.

Prabhsahai Kaur, daughter of Aam Aadmi Party candidate HS Phoolka, said the objective of the party was not to use religion, caste or creed for its benefits. “My father visits gurdwaras and temples on a regular basis,” said Prabhsahai, adding that her father had gone to Harmandir Sahib after joining the AAP and if he won the elections, the family would go to Golden Temple.

Shiromani Akali Dal candidate Manpreet Singh Ayali said being a Sikh, he believed in Guru Granth Sahib, but he visited temples, churches and mosques as well. He said if he won the Lok Sabha elections, he would pay obeisance at religious places.

An astrologer said supporters of the candidates approached him asking the “future” of their candidate. “I gave them a black thread. It will yield good results,” he said.

Chairman of the Election Canvassing Committee for the Congress Parminder Mehta said Ravneet Singh Bittu believed in secularism. He sought support from all communities. He goes to religious places without any security cover. For his win, the supporters are praying. Some have decided to perform havans while others have announced to organise langars. “If the God is with you, you can achieve anything,” said Mehta.

Despite repeated attempts, Independent candidate Simarjit Singh Bains could not be contacted. But his supporters said he wanted to uplift the poor.