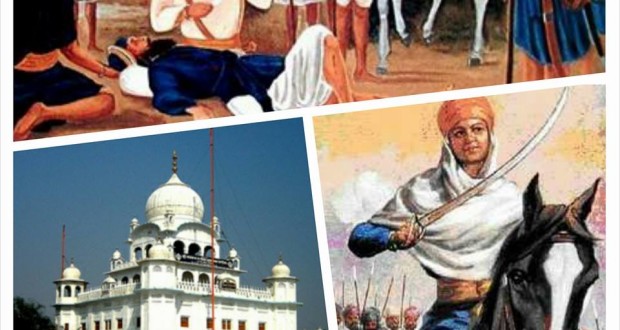 The Battle of Muktsar – Shaheedi of the 40 Muktey

A Khalsa jatha representing Majha Sikhs decided to visit Guru Jee in Malwa after hearing the accounts of the Shaheedee of Sahibzadey and the other Guru Payeray. They were led by Bhai Bhag Singh, Bhai Sulthan Singh and Mata Bhag Kaur as a Jatha of 40. There intention was to persuade Guru Jee to halt his actions on the battle field as they had some contact with the Lahore/Delhi Darbar.

After many days searching they finally found where Guru Jee was resting. After greeting Guru Jee and the Sangat they were told to sit down on a sheet placed before them. Bhai Bhag Singh leading the delegation said to Guru Jee “ We can collectively from Majha arrange a permanent agreement with the Delhi regime. You will be able to live the rest of your life in peace and we can remain your sevaks”. Guru Jee on hearing this said “ Who are you to make an agreement, where were your ancestors(from Lahore) at the time of the Fifth Guru? Where was the Majha Sikhs at the time of the Sixth Guru when he was arrested and prisoned by Jahanghir. No one said anything at the shaheedee of the Ninth Guru. You never came when we were under siege for months at Anandpur. Why have you come now don’t you have any shame.”

Bhag Singh replied saying “Gareeb-Nivaz! If you want to stay like this then our Sikhee towards you can not be kept, we will go back.”

Guru Jee replied “Bhag Singh! We never called you here. Now that you are here, can we have it in writing that there is no GurSikh left in the land of Majha.”

Guru Jee told Maan Singh from the Majha Jatha to pull out some paper and ink from his sack. Guru Jee placed the ink and paper in front Bhag Singh and his Jatha. Bhag Singh was the first to sign, then Dilbhag Singh, Garbaaraa Singh and Ganda Singh signed the paper. The other members of the Jatha lowered their heads, they did not sign the paper but were in two minds as what to do.

At this point a Sikh came and told Guru Jee that the enemy forces were nearing and that they should move from here. Guru Jee told Maan Singh and other Jatha members to go as he needed to make preparations for battle.

After Guru Jee left, Mata Bhag Kaur who was Bhag Singh’s and Dilbhag Singh’s older sister and Nidhan Singh’s wife said to the whole Jatha “We’ve already had Dhunee Chand running away with 4-5 Majha Singhs from fort Anandgad bringing shame to us from Majha which is bad enough. Now we have written this letter in front of Guru Jee, with what face can we go back to our homes.

Mata Jee further said “ What will our own say when we get back, have you had darshan of Guru Jee? People will mock us, how will we be able to go outside our homes? Wake up Lions! Rise up, Guru Sahib is merciful, he will forgive us, lets get ready. Mata Jee stood up and ignited the fire in their hearts.

Seeing this Bhai Bhag Singh and the rest of the 40 Sikhs tightened their Kamarkasey and set off in help of Guru Jee. They began their flight with “Sat Sree Akaal” shouts and then mounted on their horses.

They eventually reached a water reservoir, the enemy forces were heading towards this direction. They started to make preparations for the oncoming battle.

Guru Jee was on the other side of the water reservoir positioned on top of a hill. An agent of Sirhind came in search of Guru Jee. Seeing him Guru Jee hit him with an arrow.

Wazir Khan with his army had reached the reservoir they were met with arrows from the Jatha of Khalsa. No one advanced for a while a battle of Guns and arrows took place. When the arrows and bullets finished the Khalsa took out their Khandey and Kirpana and advanced towards the enemy shouting “Sat Sree Akaal”. Smoke was being seen on the battle, iron was hitting iron. The Khalsa made the enemy remember Alaah.

The battle continued until no Khalsa was seen standing, the enemy then decided to retreat. The Sun had already set, Guru Jee was on his way to see Maan Singh and the rest of the Jatha at the bank of the reservoir.

Guru Jee ordered to pick up the body of Bhai Maan Singh first as he was the furthest Shaheed that went into the enemy. Guru Jee cleaned Bhai Maan Singh’s face with his Rumal and said he is a Sava Lakhee(125000 Fighter). Guru Jee personally went to all the Shaheed Khalsa and did the same, calling some Das Hazaree(10000 fighter), some Bees Hazaree(20000 fighter), some Panjah Hazaree (50000 fighter) depending on how far they had gone into the enemy.

Out of all the Sikhs four were still alive Bhai Rai Singh(relative of Shaheed Manee Singh), Bhai Sunder Singh, Bhai Maha Singh. Guru Jee personally was giving them water and cleaning them. The fourth was Mata Bhag Kaur who was lying near a tree. She had a bullet wound on her arm but was still doing Jaap of VahiGuru . Bhai Maan Singh and the other Shaheed’s bodies were all brought in front of Guru Jee.

Guru Jee then asked Mata Bhag Kaur “what is your wish? Mata Jee replied “Maharaj! With your grace I am fine, I have only one injury nothing else.

The Bedava is Torn

Guru Jee then asked the other three Sikhs “what is your wish?” out of the three Bhai Rai Singh spoke and said “Gareeb-Nivaz! If you are happy with us then please tear the Panchiat letter from us and bless us with Sikhee Dhaan”

This Saka happened on samat 30th Poh 1762 (BK). Guru Jee gave all the Shaheeds the title of Muktey. He named this reservoir Isharsar Muktsar.

After the night, Sree Asaa Dee Vaar(this is the way it is written in this account) was done at Amrit Vela. Guru Jee asked Bhai Dhaan Singh to get some Ghee, Flour and Sugar. Degh of thrihaval was prepared. Ishnaan of all the Shaheed Khalsey was done and the bodies were then placed on a pile of wood. Guru Jee himself recited Sohila Paath and afterwards stood up and did Ardas. GurSikhs shook the Skies with their shouts of “Sat Sree Akaal”. Guru Jee with blessings of VahiGuru lit the fire with his own hands. Degh was then distributed amongst the sangat.

Guru Jee started a divan in memory of the Shaheeds, in this he told the Sikhs that “These 40 Muktey have given their heads for dharam / righteousness and have achieved high status. Today is the Sangrand of Magh whichever Sikh does Ishnaan in this Mukhat pool on this day will receive the same benefit as doing Ishnaan of Aatsat Thirat. All day Guru Jee sat in this Divan and gave Bachan Bilas. When night came the GurSikhs sat near where the funeral pyre was lit.

Next morning at Amrit Vela Sree Asaa Dee Vaar was done and afterwards Bhai Dhaan Singh and the others covered the place of cremation with sand. The Hukam was then given to move on. Some locals came to meet Guru Jee and the Sangat. Guru Jee told them that after we have gone do not move or touch the place where the Shaheeds have been cremated, cover it up to a noticeable high level. You will receive blessings in doing this seva. One day a Sikh of mine will come and will make this place a Shaheedee Asthan. From now on my Sikhs will remember these 40 Mukhtey twice daily in their Ardas.