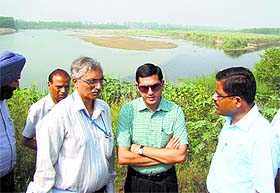 Comments Off on Team of engineers visits Buddha Nullah 479 Views

Ludhiana, Punjab: A four-member team of highly qualified engineers from Engineer India Limited, a semi-government firm, reached here today. They are on a four-day visit to the city with regard to cleaning and beautification of Budha Nullah. The team met the higher officials of the Municipal Corporation and Deputy Commissioner Rajat Aggarwal at the Circuit House where the MC officials gave a detailed presentation on the nullah.

The engineers, along with a team of the MC officials, visited the nullah. They started from Jainpur village and Bhattiyan, near here.

The Municipal Corporation Commissioner, Pradeep Aggarwal, said Chief Minister Parkash Singh Badal was concerned about the cleaning of the nullah. During his recent visit to Delhi, he had asked the company officials to visit the nullah to find out solutions to problems coming in the way of its cleaning and beautification.

The team of engineers, led by the Deputy General Manager, Sanjoy Mukherjee, has Yogesh Gautam, Anjesh Garg and Ravikant Sharma as its other members. The interacted with the officials of the MC, Sewerage Board and the District Administration. The company has been handling the cleaning of the Yamuna in Delhi.

The engineers will submit a detailed report to the state government. Those who accompanied the engineers to the site included DC Rajat Aggarwal, CEO of the Sewerage Board DK Tiwari, Additional Commissioner of the MC Sumit Jarangal.

Previous: Statue or no Statue, the cat is out of the bag as far as Gandhi is concerned: Sikh Federation UK
Next: Ten Thousand Pairs of Shoes 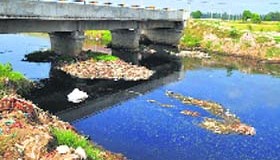