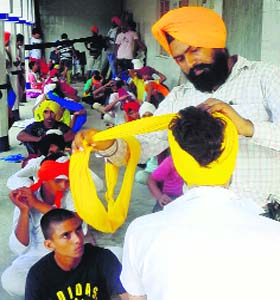 Mansa, Punjab: Qualified but unemployed! Tejinder Singh of Mansa, however, did not let his spirit flag and has been serving the community for the last three years by teaching turban tying techniques free of cost to those who are interested in it.

Besides, he even motivated the youth to retain their faith in turban, a unique cultural identity of the Sikhs, for which they have sacrificed themselves in history.

Tejinder Singh is young, well versed about the history of Sikhism, has done his MA in History as well as M.Ed. He has even worked at the vegetable market for his survival while coaching Sikh youths about the turban tying methods not only in Malwa belt in other states too.

Making it his mission to train Sikh youths in tying turban, Tejinder has organized over 350 “Dastar” coaching camps across India. Thousands of Sikh youth have received training in tying turban and the mission is on. He claims to have made many Sikhs youth return to their culture of tying turban and motivated many to remain firm on retaining their ‘kesh’ (hair).

Tejinder (30) has been running from pillar to post to get a job but in vain. “Besides my parents, I have a family and I hardly manage to fulfill their basic needs. I used to travel to nearby areas on a bicycle to impart training in tying turban. All the training is free while sometimes, the organizers give me travelling allowance. I had to labour in the vegetable market of Mansa to earn money and meet the expenditure incurred on turban coaching camps,” he said.

“Earlier, I joined a private school that used to pay me just Rs 3,000 per month, which was not enough to earn two square meals a day. I left the job and then started taking tuitions. I take tuition for two hours in the morning and then go to train youngsters in tying turban,” he added.

“Neither any Sikh organisation nor the SGPC has held my hand in this cause even as I need adequate resources and equipment for turban tying camps,” he said.