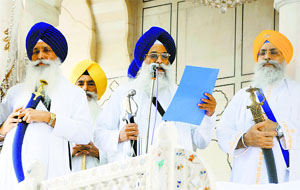 Akal Takht Jathedar Giani Gurbachan Singh, while reading out his edict from the rostrum of the Takht this afternoon, said: “The Sikh Sangat is directed to socially, religiously and politically boycott these individuals until they appear before Akal Takht and undergo ‘tankhah’ (religious punishment).”

The decision came after the Sikh clergy and the SGPC executive committee held separate meetings. The meeting of Sikh high priests was preceded by a meeting of the SGPC executive, which passed a resolution terming the Haryana Sikh Gurdwara (Management) Bill 2014 to form a separate gurdwara panel for Haryana as “unconstitutional” and seeking action against Haryana Sikh leaders involved in it.

The Jathedar said: “The Sikh high priests today received a representation from SGPC members, executive committee, Sant Samaj, Nihang Singh organisations and other bodies, seeking action against the individuals involved in dividing the Sikh community. We’ve deliberated upon it. The SGPC is the premiere Sikh organisation which was formed at Akal Takht. However, some Sikh leaders in Haryana have challenged the supremacy of Akal Takht by becoming a part of the conspiracy to divide the SGPC. Among them are Jhinda, Nalvi and Chattha. These leaders were earlier called to the Takht, but they disobeyed the directions. They also didn’t appear before the panel constituted by the Takht.”

He said they had decided to “withdraw their honour and rights of being a Sikh” after deliberations on the demand of various Sikh organisations.

The Akal Takht Jathedar later told mediapersons that the SGPC was responsible also for what had happened since it had ignored the demands of Haryana Sikhs for a separate gurdwara panel. “However, this doesn’t mean that they can divide the SGPC,” he said.

He said there was no haste in excommunicating Haryana Sikh leaders as there were instances in the past when individuals were excommunicated without being summoned to the Takht.

On why no action was taken against Chattha earlier — the Haryana Finance Minister was the chairman of the committee that recommended the creation of a separate body in keeping with the aspirations of the Haryana Sikhs — he said they had received no complaint against him.

On Takht Shri Patna Sahib Jathedar Giani Iqbal Singh’s participation in the Sikh clergy meeting, he said he was invited to the meeting in his capacity as the Takht Jathedar.

The SGPC executive earlier held a brief meeting and passed the resolution seeking action against Haryana Sikh leaders in accordance with the Panthic traditions, a copy of which was presented to the Akal Takht Jathedar by SGPC president Avtar Singh Makkar.

Though the resolution didn’t specifically demanded excommunication of these leaders, Makkar told the mediapersons that they had sought their excommunication. He said they would not allow anybody to take over the management of gurdwara affairs in Haryana.